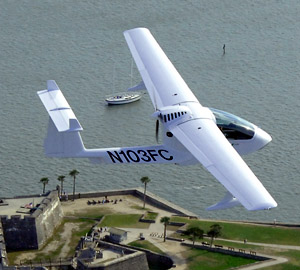 LSA Aero — based in Tanner, Alabama — sells the three Colyaer designs: Freedom S100, Martin 3 (land plane), and Gannet, a non-amphibious seaplane. These airplanes were developed by Colyaer of Pontevedra Spain and have been flying in Europe for eight years.

Perhaps it’s a little ironic that Freedom wins its freedom. When I spoke with importer Don Langford at the Sebring LSA Expo he sounded somewhat unsure about the future for his Spanish amphibian. He’d submitted information for an exemption but had no reply. Yet shortly after Expo ended FAA granted LSA Aero‘s request for the Colyaer Freedom S100. The exclusive club now includes Czech Aircraft Works’ Mermaid and the Freedom. *** Each person exercising Sport Pilot privileges is required to obtain additional ground and flight instruction — on landing gear inspection, operation, and emergency procedures to include six takeoffs and landings and three in-flight gear movements. After a logbook endorsement and with appropriate placards on the aircraft, a Sport Pilot is allowed to move the gear as designed. Congratulations to Don and LSA Aero. This may help crack the door open wider for other amphibious LSA. FAA’s Exemption is good until January 31, 2011, by which date we can hope the agency finds a solution to the original rule and no longer needs exemptions.