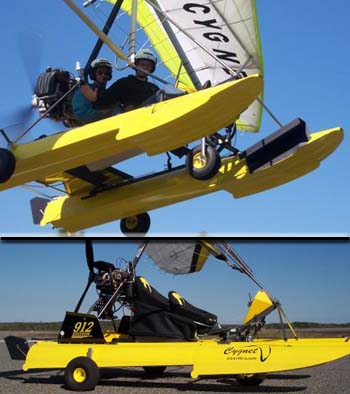 Triple digits! In five years the LSA industry has reached SLSA model #100. Actually, here’s another one that slipped by our radar. Info now shows SLSA #99 was the Krucker amphib trike named Cygnet and Van’s RV-12 was technically #100. Our SLSA List shows Special Light-Sport Aircraft in order of their approval. *** “We got our SLSA completed 3 July 2009,” wrote U.S. representative, Michael Percy, of XL Kites. This means the Cygnet he imports was approved a couple weeks earlier than the Van’s RV-12 on July 21st, which came one day after the fifth anniversary of the new rule announcement (July 20th, 2004). *** One hundred models approved in such a short time has no comparison in worldwide aviation history. In fact, reaching #100 only took 4.3 years because the first approval occurred on April 7th, 2005 …that’s two new models every single month! *** The other triple-digit figure — the number of companies who have registered more than 100 aircraft — hit five as SportCruiser models exceeded 100 units in the USA. Formerly Czech Aircraft Works, producer Czech Sport Aircraft now joins Flight Design, American Legend, Tecnam, and Remos in the exclusive triple-digit sales club. Other LSA climbers include Aerotrek/Aeropro, nearing the 50 mark with their economical tri-gear or taildragger models (average price about $75,000, they say). Watch for our next market report with more details.