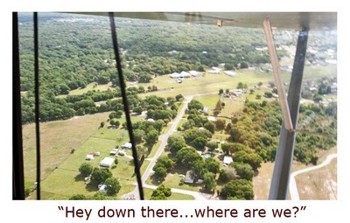 Kids, don’t try this at home… or in the air.  Well, unless you leave yourself no other choice. *** While flying a new LSA on the day after the Sun ‘n Fun airshow, my demo host and I were enjoying the puffy cloud kingdom somewhere not too far from Lakeland Linder Field in central Florida when the Garmin G3 center display went black. *** No amount of coaxing, button pushing, or breaker recycling would bring it back.  We chalked it up to a new installation and the fact we’d sat on the ground for 45 minutes in the heat, in a ridiculously long line of departing airplanes — and a methodically sloooooow tower controller determined to go by the book while 30 airplanes sat watching their engine temps rise …and rise. This guy could learn a thing or two from the boys at Oshkosh about expediting departures. *** Anyway, here we were a few minutes later, tooling around the countryside, not overly concerned about losing the one display, when bip!, the other G3 display coughs, hiccups, and goes down, too. *** Sympathy pains maybe but Holy Hannah, whatta we do now? *** “Fortunately,” said my right seat companion with a confident smile, he being an ex-Air Force jet jockey, “I’ve got a GPS along as a backup.” *** I breathed a sigh of relief as he rummaged around in the baggage compartment behind the seats. *** “Hmmm,” he said (and did I detect a twinge of embarrassment?), “I don’t seem to have the GPS.  I must have left it on the ground.” *** “Well, no problem,” he continued with strained joviality.  “I’ve got a sectional… now, where is that sectional?” *** Several minutes later, after the sectional proved to be irretrievably buried somewhere in all the gear, we both scanned the green farmland, swamps and sand mines or whatever those big square water-filled dirt lakes are and realized we were completely and utterly lost. *** I opined we were west of Lakeland.  He thought we were south. *** One thing I’d never noticed: It’s amazing how much one area of Central Florida looks remarkably like many other parts of Central Florida. *** All ended well: I whipped out my Swiss Army Knife of electronic devices — the ubiquitous iPhone that never leaves my side unless I forget it — tapped the GPS app icon, and lo and behold, we had enough of a signal from below to show us right where we were, which turned out to be a little west and 20 miles south of Lakeland.  *** Ah, yes… love my little iPhone.