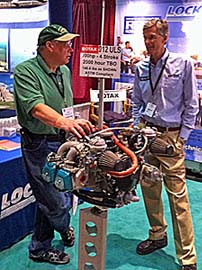 Phil Lockwood (R) visits with a customer at AOPA Summit 2011. 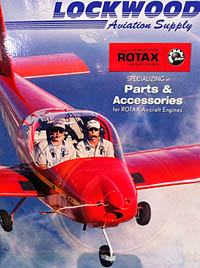 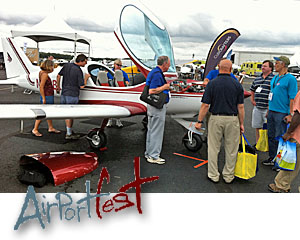 At AOPA summit I spent time in the Lockwood Aviation booth giving me a chance to speak with a few RV-12 builders. *** Van’s has reportedly sold approximately 600 RV-12 Light-Sport Aircraft, of which 150 may be flying, making RV-12 by far the most successful Experimental LSA. RV-12 would among rank high among all Light-Sport Aircraft were we able to include ELSA in the SLSA List (…we cannot, for several reasons). In a sign that proprietor and industry leader Phil Lockwood sees good potential in RV-12 service work he displays the leading ELSA on his latest Lockwood Aircraft Supply catalog. Van’s did not exhibit at Summit 2011. *** I found it equally interesting to hear much improved reception to the Rotax line compared to earlier AOPA Expos or Summits. Perhaps it’s the 2,000-hour overhaul time. Maybe it’s the 40,000 9-series engines Rotax has installed on aircraft. Possibly more widely available Rotax service as seen on our FIRM List. Regardless, it seems likely Lockwood Repair services — and those provided by other Rotax centers — should enjoy good maintenance business for many years. |||| At the airport, visitors were greeted by a Cessna Skycatcher, which the big company positioned as the first aircraft inside the gate. Among LSA purveyors, Remos, Flight Design, Jabiru U.S., Arion Lightning, and CubCrafters had displays, as did Terrafugia though the latter was in the convention hall regularly folding its wings in and out. *** At Airportfest, Liberty Sport Aviation‘s Bristell was a hit, making its U.S. debut. People liked the 51-inch-wide cockpit, “…as wide as the Cirrus SR22,” said rep’ Barry Pruitt, who also stated that a 6-foot-8-inch father and son duo sat, and comfortably fit, under the bubble canopy with headroom to spare. Many were impressed with the smooth curves on the all-metal SLSA. Prices start about $125,000. |||| On Saturday, EAA and AOPA made a joint announcement that they will petition FAA next year to drop the third class medical for certain GA aircraft, limiting such privilege to one passenger and no more than 180 horsepower in day VFR. Read more from EAA. Though EAA and AOPA say doing away with the medical is supported by experience from Sport Pilot/Light-Sport Aircraft, the message was received warily by LSA sellers even as AOPA members gave loud approval at the morning session. Because many LSA are sold to pilots concerned about their medical, some felt the surprise announcement could chill sales that are already slow. However, other experts didn’t perceive the negative and most pilots are aware the number of medically-related accidents is vanishingly small, plus generally, removing any barriers to more flying activity is a net gain. Yet even EAA and AOPA officials agreed the chance for victory is uncertain on this sixth try to go to a driver’s license medical and approval may take two to five years, if ever. With disparate reactions to the announcement, only time will show how this new initiative might benefit aviation growth and activity. Regardless, it is fascinating to see the onetime rival member organizations harnessing their considerable horsepower in a combined effort.