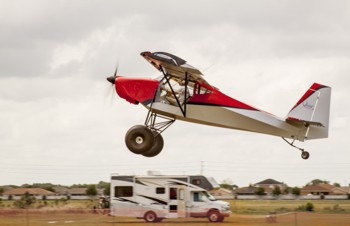 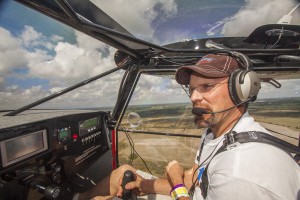 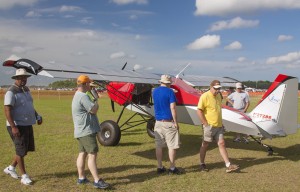 See what I mean about enthusiasm for the SuperStol? This was at 9 a.m. 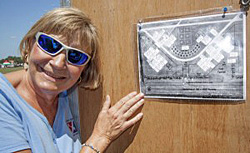 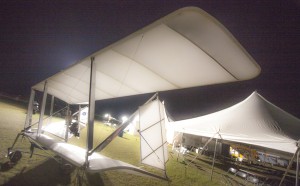 Ghost of the past: a powered Easy Riser, originally a foot-launched hang glider. I built a few myself back in the day (late '70s) 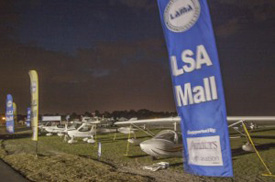 Resting for the next day's crowds: Part of the LSA Mall by the new, curving road installed over the winter. 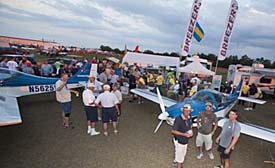 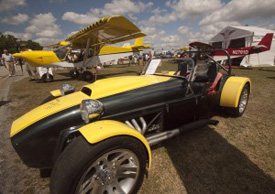 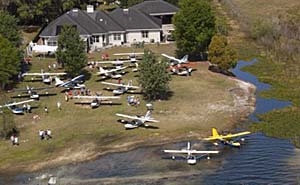 Two days before the show, I went to the annual SeaRey Fly-In put on by Russ Garner and his wife, long-time friend Lou Ann. Both are veteran ultralight fliers from the '80s. Russ built his own SeaRey years ago and the annual event, when the weather's good (when is it not except during hurricane season down here?) a bunch of the loyal amphib owners fly in for a day of fun, food, flying, raffles and good old fashioned Florida hospitality at "Garner's Landing". 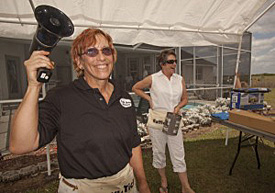 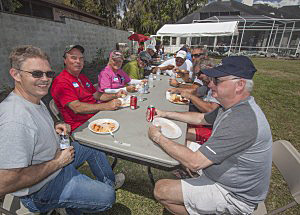 Lots of really good eats and a raffle of fun stuff, (including a TV) added to the fun. I won a SeaRey hat! 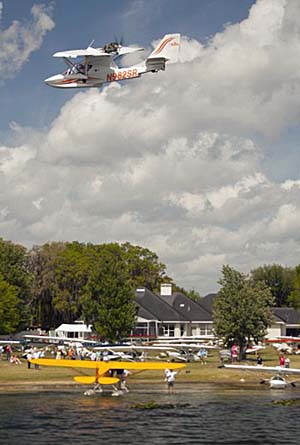 SuperStol: Able to leap tall RVs at a single bound. Drawing lots of attention is the Just Aircraft SuperStol LSA kitplane (soon to be an SLSA) that has self-deploying leading edge slats, oleo main gear shock-absorbing struts (with humongous tires), even a shock absorber for the tailwheel. I found out later I was the first flywriter to get some time in the critter. Whether true or not, I felt like a kid on his first flight again: what a fun airplane! True — and amazing — STOL performance befitting a Helio Courier-style plane. My report will be out soon in Plane & Pilot magazine.

It’s the third day at Sun ‘n Fun. Breezy, hottish (high 80s), humid: in other words, classic Florida Spring weather. The attendance seems steady if not overwhelming. I’ve been hanging out a lot in the new Paradise City Light Sport/Ultralight area and grass landing strip in the southeast corner of Lakeland Linder Airport, and enthusiastically report it is vastly improved over previous years. Biggest news is probably the merging of Dan Johnson’s LSA Mall showcase for Light Sport manufacturers right next to the grass demonstration flying strip. Now industry reps can show their wares, then roll said wares right across the grass to the strip and give their customers a demo flight. How cool is that? In the past, the Mall was near the main entrance, and Paradise City seemed much more remote than it does now. Well done, Sun ‘n Fun, for making such an improvement! There have been some kinks in the demo flight information about who can do what, when, such as a rumor that flew around a couple days ago that anyone leaving the 5-mile TFR from Paradise City (a common practice for potential customer demo flights) would not be able to return until the TFR was lifted at day’s end. Obviously, a ridiculous damper on the purpose of the entire restructuring of Paradise City if true, but the info was mostly a misunderstanding. Restrictions were in place only during a couple acts of the main airshow. The rest of the time, it was ops as usual in Paradise, including allowing demos even during the airshow except as noted, another improvement.

Another welcome change to go along with the extended runway and filled-in runway-end ditches that used to make landing sometimes daunting is the road from the main part of the show to Paradise City. Now it curves down nice and close to the runway, there are regular trams from the main gate to the area, and all in all the entire operation makes the Mall and Light Sport and ultralight flying activity dramatically more accessible and appealing … easier for folks to find, get to and enjoy. So come on out to the show, have fun and support the winged troops, folks!

LAMA President Dan Johnson's right hand gal and spousal unit Randee Laskewitz shows me the map of the new Paradise City layout. The road from the airshow's main entrance now arcs down much closer to the now-1,400 foot grass strip at bottom.

Mike Zidziunas, or Mike Z as we all call him, hosted a big Bahamas Bash at the Breezer tent after he and his cronies did a four-ship, tight formation flyby of the airshow. Mort Crim's 22-minute video of the LSA flyover to Grand Bahama and Bimini after the Sebring 2013 Expo drew a lot of thirsty pilots. Mike's in the foreground in front of the Breezer prop, at left. Thanks Mike, great party!

At Sun 'n Fun, there's always something to catch your eye. Here's a kit car for sale; in the background, the new Zenith CH 750 Cruzer, flown 1,000 miles to the show by company head honcho Sebastien Heintz. The kit (no word yet on whether it will go SLSA) is equipped with the UL350iS 130-hp fuel-injected UL-Power engine and a Dynon SkyView glass panel. The leading edge slats of the CH 750 are gone: this is meant to be an LSA-style … well, Cruzer.

This year, bright blue, puffy-cloud skies drew more than 20 SeaReys to the Garner's back yard/grass ramp on a small lake in Auburndale. Even Progressive Aerodyne (SeaRey builders) CEO Adam Yang and President Kerry Richter dropped in. Kerry gave enthusiastic demos well into the afternoon … on his day off. Globe-hopping SeaRey veteran owner/pilot Dan Nickens who flew me around for air2air photos in the Bahamas (story in April issue of P&P) did me great service once again so I could get air2ground shots of the event. Thanks again, Dan!!!