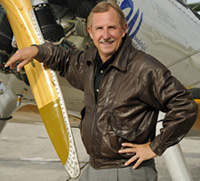 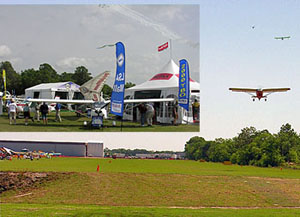 The LSA Mall will move to take advantage of the upgraded Paradise City runway (see aerial view below). Note how a deep ditch has been fixed at the west end. 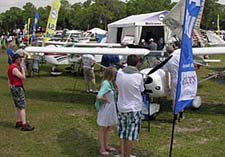 The LSA Mall attracts lots of folks who like seeing many brands of LSA wingtip-to-wingtip as it saves considerable walking around the extensive grounds. 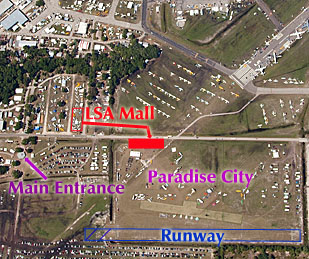 As many prepare for the opening of Sun ‘n Fun in only three weeks, I attended a meeting relative to the area known as Paradise City or the Light Plane Area, though some simply call it the Ultralight Area. Whatever you call it, dramatic changes are underway and you should pay attention. *** Our meeting was arranged by 23-year area chairman Dave Piper with brand new Sun ‘n Fun boss John “Lites” Leenhouts (yes, everyone calls him “Lites,” a nickname he picked up in the Navy*). Also attending were operations boss Wayne Boggs plus convention director Laura Vaughn and exhibit director Bonnie Perkins. Dave assembled this group so we could discuss changes to come. *** For 2013, the LSA Mall will relocate to the entrance to Paradise City, that is, right alongside Doolittle Road, the paved road that runs east/west just inside the main gate, connecting the Florida Air Museum with Paradise City and on down to Choppertown (see map). The LSA Mall started just inside the main gate for 2008 and 2009, then moved to a prominent spot in the Southeast Exhibit Area for ’10, ’11, and ’12 (see aerial view). A move to Paradise City will likely be the permanent location for the LSA Mall and it will become a beacon for the Light Plane Area. *** Why is this important? — For those that remember, the former Ultralight Area was once one of the most dynamic on the Sun ‘n Fun grounds. Flying goes on all day (except during the main airshow… but see below!) and after the main event ended a wave of people flooded the Ultralight Area where flying went on until sunset. The variety of airplanes was incredible but the main draw was how close you could get to the action. *** Then came Light-Sport Aircraft, along with a flock of new business people, many of whom didn’t know the charm of Paradise City. They looked at other exhibit locations that were perceived to offer higher traffic (perhaps correctly, perhaps not). Paradise City suffered for a few years but has begun to revive. In 2011, people standing along the fence line right near the Paradise City runway looked somewhat like the old days. |||| Game Changer — Most visitors to the area didn’t notice that the runway had been greatly improved, with a major ditch at the west end smoothly covered to allow a safety overshoot. The same will happen to the big ditch on the east end, probably in the next year or two. The runway was always long enough for Light-Sport Aircraft and now it appears much more user friendly. But even those costly changes are not the really big news. *** At the mid-February meeting, operations boss Wayne Boggs said the Paradise City runway can remain in operation even while the main airshow is happening, except for a short closure while the military jet teams like the Thunderbirds or the warbirds perform. This means LSA and other light recreational aircraft can operate from Paradise City nearly all day long. LSA vendors can offer demo flights to prospective customers without those people having to leave the Sun ‘n Fun grounds. This is the best news for Paradise City in years and I’m excited about its potential.

* Talk about a short field landing expert — Lites holds the distinction of performing more landings on an aircraft carrier than any other naval aviator in U.S. history with 1,645 cable-arrested landings.