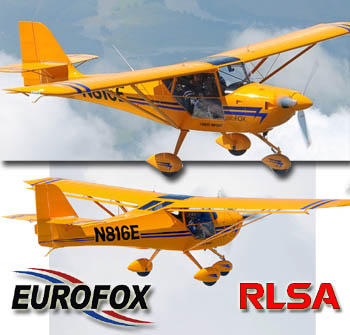 As with most Rotax-powered Light-Sport Aircraft EuroFox can run at 4 gph or less for a fuel-operating cost of less than $10/hour by using 92-octane auto gas. Folding wings and a trailer can save hangar expense. Read my review of EuroFox.

This week we’ve heard of a couple price rollbacks based on the euro/dollar exchange rate favoring the dollar. Notably among them is the EuroFox by Aeropro sold in this country by Rollison Light Sport Aircraft . Buyers can save a whopping $10,000 on what was already one of the better-priced SLSA. Now at $58,950, the folding wing, snappy-flying EuroFox — available in taildragger or tri-gear configurations — looks to be a surprising value. Importer Rob Rollison says financing is available to make a EuroFox even more affordable. *** Lots more appears on the horizon for RLSA, which has been involved with light sport aviation since before the beginning. Rob has been hinting about new airplanes he may represent. Plus, EuroFox will go through a name change in 2009. New name or not, EuroFox surprises many who look it over closely, myself included. I expected a factory-produced “kit plane” yet the finished SLSA is quite professionally achieved. *** This is a design configuration with plenty of proof behind it. More than 260 are flying around the world with U.S. registrations presently at 37 aircraft for about 2.5% of the SLSA market putting AeroPro in the #12 position among all manufacturers.