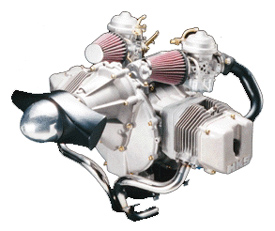 Welcome to the 2-cylinder, 4-stroke HKS, now available for Light-Sport Aircraft. You can read my evaluation of the HKS engine as mounted by ASAP for their Chinook Plus 2.

After Rotax announced ASTM compliance for their lightweight 582 two-stroke engine, many American pilots celebrated. This lighter, simpler powerplant (compared to the 9-series engines) gave ultralight builders seeking SLSA certification more flexibility while significantly lowering cost for buyers. Now HKS enters the arena issuing a Statement of Compliance for the horizontally opposed, twin-cylinder, four-stroke, 60-hp 700E engine. HKS is lighter than four-cylinder engines and can save buyers several thousand dollars. American importer HPower has assisted at least 29 companies as they became HKS-powered, including such leading names as RANS, Quicksilver, Murphy, Earthstar, CGS, Titan, ASAP, and Flightstar. The Japanese company, HKS Aviation Co., Ltd., made their declaration on July 16, one month after the Rotax 582. Behind HKS Aviation is real depth in a 400-employee company active in high-performance auto components. I’ve flown a number of airplanes with this engine and have become converted to its smooth power.