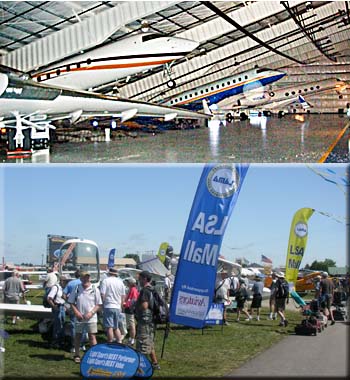 Market Crunch — After the market fall of the last two years (like the snow-laden roof that crashed on a small flock of bizjets), LSA could recover first, thanks to lower purchase and operation costs. Balancing that… after five years of LSA, the entire industry still represents less than 1% of all single engine aircraft in America.

It has to get better! According to GAMA, the organization which represents the Type Certified aircraft world, “2009 worldwide shipments of general aviation airplanes declined for a second year in a row with a total of 2,276 units delivered, a 42.6 percent decrease over the previous year’s total of 3,967 airplanes.” However, GAMA numbers include twins and turbines, which include all bizjets. *** A fairer comparison to Light-Sport compares only piston aircraft. Here GAMA says, “The piston airplane segment experienced the greatest decline at 54.5 percent. Shipments totaled 965 airplanes in 2009, compared to 2,119 unit airplanes in 2008.” *** Think about those two numbers. They compare to 234 LSA in the difficult year of 2009, down 42% from 2008’s 406-unit performance. LSA sales — as measured by aircraft N-number registrations — show the ratios between general aviation and Light-Sport. In 2009 LSA sales equated to 24% of GA piston sales; both figures are industry-wide. In 2008 the ratio was 19%, so while significantly off, LSA did slightly better than GA piston sales in 2009. *** LSA registration numbers are down from 2007 (565 fixed wing aircraft registered) and 2006 (491). But discounting economic woes, the figures appear to show that LSA represent somewhere between 20 and 25% of GA piston sales and I predict this share will rise, with LSA becoming closer to 33 to 50% of all piston sales. *** When will that happen? It could be another five years, allowing for four factors: general economic recovery; increased acceptance of the LSA concept; continued adoption of ASTM standards in more countries; and the opening of potentially giant markets like China and India. Some experts believe global interest in LSA will also stimulate U.S. sales.