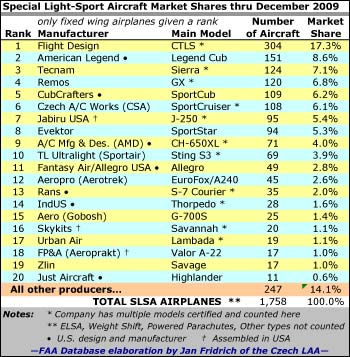 Better Times Ahead? — Along with the rest of the U.S. and global economy, we expect much improved results for light aviation in 2010. Numerous indications appear to suggest good trends but questions remain, for example, FAA actions based on their 2008/2009 Assessment Project.

If you refer back to our earlier reports, you can easily see 2009 was a down year (no surprise, right?). General aviation was off more than 50% and Light-Sport was down badly as well, with 42% less registrations than in 2008. *** With this post, we present our now-somewhat-famous chart. We hear from some who say they prefer the info to be broken out for the last year only and I will give a summary of those figures below. We realize the limitations of such a brief portrayal of the market situation. But to maintain consistency from chart to chart, we continue to present the relative market shares since the first registrations were filed back in April 2005. *** However, I did omit two listings as they recorded no new entries for more than two years. Interplane and Jihlavan technically rank in the top 20 but their inactivity resulted in a drop from the chart. I also dropped Sky Arrow as its producer is under court management. Fantasy Air ceased operations in the Czech Republic but Allegro USA is working to restart production in America, so we continue to show their strong initial performance. Urban Air, which remains on the chart, has stopped manufacturing. If I omitted the Lambada builder, Paradise would make the top 20. *** My excellent associate, Jan Fridrich — who compiles this info from FAA’s registration database — works hard to determine which aircraft are truly SLSA (and not ELSA or other categories) and it remains a struggle due to FAA’s data entry procedures. This is why we cannot show trikes or powered parachutes, with regrets. Given the preceding statements, we believe this to be an accurate list. Many hours go into this effort and Jan deserves a hearty thanks. *** FOR 2009… it was a lousy year and I will not present the same chart detail. But here are the top 10 brands with the most FAA registrations for the year: Remos (32); Czech Aircraft Works/Czech Sport Aircraft (31); CubCrafters (24); Flight Design and Tecnam (tied at 20); RANS (18); Jabiru US (11); American Legend, Aerotrek (Aeropro), and Skykits (tied at 7). *** REMEMBER — All numbers are FAA registrations and not sales. Each company may have slightly different data to report.