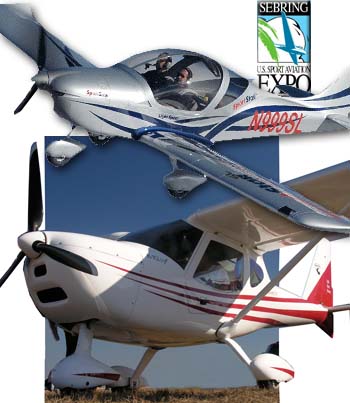 SOMETHING OLD – SOMETHING NEW (Part 1) — Evektor’s SportStar was the first Special Light-Sport Aircraft approved under ASTM standards, back on April 8, 2005. Here the new SL model shows smoother lines. On the ground is the newly debuted — though not yet ASTM certified — Skyeton K-10 Swift from Ukraine.

Sebring was a welcome event for all who participated. Companies that stayed home may be wondering if that was the right move. With record crowds, airplane orders taken, and merchandise selling out, the Florida LSA show gave a welcome lift to a global aviation industry that’s been laying off workers by the thousands. But, besides the general good news I’ve been asked dozens of times, “What was new?” at the event. Here’s my list; details will follow in other SPLOG posts. Surely I’ll leave out some worthy aircraft (you’ll tell me, I hope, and I’ll include them). *** In no particular order…the well-proven RANS S-6 Coyote debuted as an SLSA; Urban Air’s newly certified Samba complements their lovely Lambada; FPNA’s amphibious Cape Town appeared on brand-new floats; Paradise delivered their first hand-control P-1; Remos debuted their GX 2009 with new gear and a redesigned interior; a year after its debut at Sebring ’08 CTLS displayed the first-ever Garmin 696 installation, while the avionics company announced their GDU 370 and 375 MFDs; Evektor showed their SportStar SL with a recontoured exterior; Tony and Adriel Anderson showed their Fk9 on new Baumann amphib floats; they’re teaming up for sales with Hansen Air Group, which also showed a production version of their new FA-04 Peregrine; Zenith Aircraft constantly demo flew the STOL CH-750, an upgrade from their popular 701; Cessna identified notable changes in the final Skycatcher design (a larger tail) and confirmed first deliveries in ’09; and, the K-10 from Ukraine-based Skyeton made its worldwide debut…and made a sale. In all, a great Sebring!