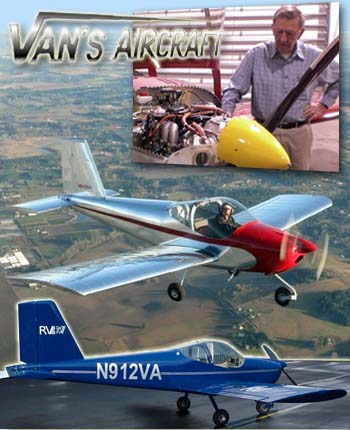 RV-12 N912VA, known as “New Blue,” is based in Maryland and was built and flown by Van’s East
Coast rep, Mitch Lock. Look for New Blue at Sebring and Sun ‘n Fun.  “Ole Blue” is the original
prototype RV-6A, still soldiering along with 5,000+ hours on the airframe, said spokesman Ken Scott. Click for RV-12 specs and info.

Yes, Cessna’s Light-Sport Aircraft entry helps to validate the concept of industry consensus standards in lieu of government certification. They’ll populate airports with their C-162 Skycatcher as shipments ramp up in 2010. Yes, other big companies are looking at LSA — as most LSA enthusiasts know Cirrus offered an entry though work has stalled, and late 2009 rumors hint at entry by another legacy brand. *** While it’s good to see big boys coming into the game, the biggest-of-all kit builder is also playing. And, in their characteristic way, Van’s Aircraft is quietly racking up sales. According to Ken Scott, “We’ve sold 315 [starter kits] for RV-12. Fifteen are flying and judging from the number of powerplant kits we’ve shipped they should start sprouting like mushrooms pretty quick.” *** The company founder likes RV-12, too. Ken added, “Dick VanGrunsven and his brother Jerry recently completed and flew their personal RV-12 and Van often uses it to commute from his home to [the factory in] Aurora. *** Scott also reported that the first Australian RV-12 has flown and that several more are under construction in countries from Brazil to South Africa. *** Van’s recently released an interior package for the airplane, as well as a 2-axis autopilot option. Additional options — including dual EFIS, lighting, and wheel fairing packages — are under development. Wiring and switching for these has been provided in all kits, so they should install easily, even into finished airplanes.