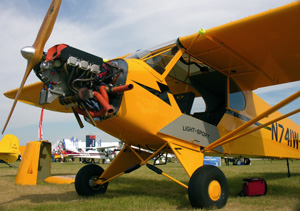 The Legend Aircraft folks were kind enough to remove the cowling around their new Jabiru 3300-powered Cub so that I could photograph the installation for this SPLOG report. The third Cub-like SLSA, the Zlin Savage, is the only one to use a Rotax 912.

Legend Aircraft‘s Cub is one of the top selling SLSA, ranking up high with Flight Design’s CT, Fantasy Air’s Allegro, Evektor’s SportStar, and TL Ultralight’s StingSport. Both American-made Cub-like designs (Legend’s and CubCrafters‘) have been 100% Continental O-200 powered because that engine is close to what was used in the original Piper J-3 Cub, which has driven demand from customers attracted to the vintage aircraft. However, the Cubs have higher empty weights than many of their smaller metal or composite competitors — CT and StingSport, being primarily carbon fiber airframes, weigh in almost 200 pounds lighter, for example. So, when operating at higher elevations or on floats, reported Legend staffer Pat Bowers, some owners felt more power would be useful. For several weeks the Sulphur Springs, Texas factory worked to install the Jabiru 3300. The six cylinder engine is 35 pounds lighter and has 20 more horsepower, a combination said to provided spirited performance.