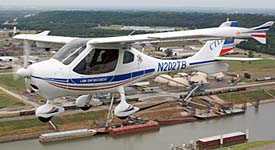 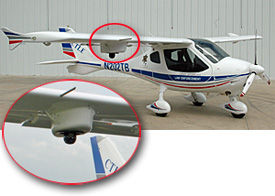 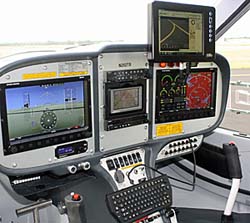 An adjustable video display screen can be folded to a stowed position and is operated via the “iKey” keyboard. photo courtesy Roger Crow

Light-Sport Aircraft can be working aircraft (think: flight instruction and rental, each potentially a commercial activity) but read about this new twist. *** Recently, Flight Design USA delivered a customized Light-Sport Aircraft to a sheriff’s department in California. A CTLS fitted with police camera, radios, and custom controller was dubbed CTLE for “Law Enforcement.” The specially equipped CTLS was completed at Flight Design USA headquarters. Near the end of August 2011, two police officers from Tulare County, California traveled to Connecticut and then flew the special LSA back across the country. *** Commonly police departments have used helicopters or larger general aviation aircraft for activities like surveillance work. Helicopters are especially expensive… to buy, to operate, and to maintain. Realizing this, Flight Design USA’s big distributor, Airtime Aviation worked with Roger Crow of Echo Flight Resources on a second CTLE modified with a pod for the CTLS right wing. The team installed a Cloud Cap Technology TASE 200 gimbal camera unit. The CTLE’s interior received an adjustable video display screen that folds to a stowed position in a side pocket and an  “iKey” keyboard is used to operate the on-board computer/processor and video recorder. *** In initial flight testing “CTLE didn’t even know there was a pod hanging on its wing. With a density altitude of over 4,000 feet (temperatures above 100 degrees) the indicated airspeed was reading 117 knots,” observed Crow. *** The first CTLE was bought by California’s Tulare County Sheriff Department Captain (and pilot) David Williams who noted that his department will be the first agency in the U.S. to put a Light-Sport Aircraft into full time service in support of patrol. “The Flight Design CTLS can do much of what the department’s existing plane, a 1973 Cessna Skymaster, can do with lower fuel and maintenance costs,” said Williams. He reported that CTLS can slow down to about 50 mph, allowing it to circle and conduct aerial searches for suspects on the ground. “You can make the same sort of orbit as a helicopter without any problem,” Williams concluded. *** Police cruisers can cost a sheriff’s department $60,000 and typically those hard-driven cars are retired from service after only three years. “Even after adding high-tech surveillance equipment, a $250,000 Flight Design CTLE should serve more than 12 years,” said Flight Design, making their CTLE “a worthy investment even compared to police automobiles, much less helicopters.” *** Exploiting the advantages of the Sport Pilot certificate, Williams observed, “It is easier to train existing [police] personnel since the CTLE is a Light-Sport Aircraft.” *** Following market leader Flight Design other LSA suppliers are also pursuing law enforcement sales of LSA.