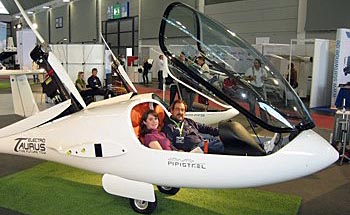 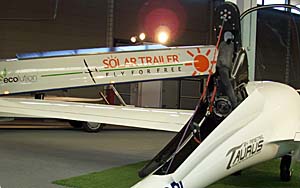 Pipistrel also offers a transport trailer with solar cells on the top, able to recharge the batteries while driving down the road.

Eric Lindbergh, grandson of Charles A. Lindbergh, awarded the LEAP Prize to Pipistrel’s Ivo Boscarol at the just-finished Aero General Aviation convention in Friedrichshafen, Germany. *** The 3rd annual e-Flight gathering took place there also, and Lindbergh’s Best Electric Aircraft award went to Pipistrel’s Taurus Electro. *** There were some notable challengers in the category and three finalists: the Taurus, the Electric Cri-Cri (power by Electravia), and Eric Raymond’s Sunseeker II solar airplane. *** Also awarded was the Best Electric Propulsion. The two finalists were the LZ Design FES (Front Engine Sustainer) system and the Rapid 200 Fuel Cell propulsion system from Polytechnic Torino. *** The LZ FES was the winner. *** The LEAP 2011 Outstanding Achievement Award went to Bertrand Piccard, Andre Borschberg and the Solar Impulse Team for its electric around-the-world project airplane. *** A romantic, and apt, spin on the awards is linking today’s electric pioneers to Lucky Lindy’s amazing transatlantic flight in 1927, which pretty much singlehandedly changed the global perception of aviation from a daredevil hobby or foolhardy mail delivery system to the common transportation, recreational and warfare tool it has become. *** It may be years before there is a viable non-motorglider style electric aircraft. Battery density advances are needed, since gasoline still has more than 70 times the energy per pound of the best commercially available batteries today. *** But…it’s coming, and publicity-rich enterprises like the LEAP award are helping fuel public acceptance of the new technology. Meanwhile, we can all have fun thinking about flying for pure enjoyment…on near-silent propulsion. *** And congratulations to all the winners, including Pipistrel for the Taurus Electro, which is the first commercially available electric two-seater aircraft in production. And it sells with a Solar Trailer, which charges the batteries with sun power while the bird is stored. *** Kinda cool.