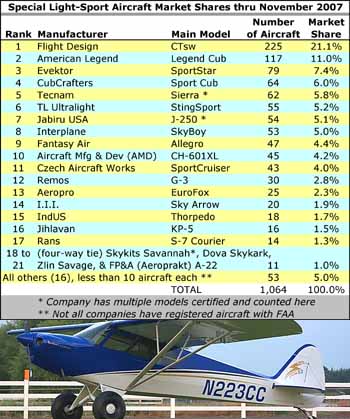 Chart shows registrations through eleven months of 2007. One star of 2007 is CubCrafters and their Sport Cub (photo), which more than tripled its registrations. Other 2007 rising stars: SportCruiser, EuroFox, & G-3.

With one month to go before we evaluate all of 2007, here’s an early picture. In eleven months, industry added 499 fixed wing airplanes plus a healthy fleet of trikes and powered parachutes. I expect SLSA registrations to reach 544 airplanes for the year, nearly a doubling of the 565 we had last January after sales were tallied since beginning in April 2005. In its first 20 months, industry registered 29 airplanes a month on average. In 2007, that number will rise past 45 a month (up 56%). The entire airframe producer community should generate almost $60 million in sales. *** The top three remain unchanged as CTSW, SportStar, and Legend Cub held their lead even while 17 new models entered the marketplace. One of the most notable rising stars of 2007 has been CubCrafters. The Sport Cub maker started well down the January chart with only 15 registered airplanes. They’ve more than tripled their base of owners rising from 9th place to 4th. With Legend and Zlin, yellow taildraggers account for almost one in five SLSA. Another brand to watch is Jabiru which more than doubled its fleet from January through November (although that feat was nearly matched by leaders Flight Design and Evektor).