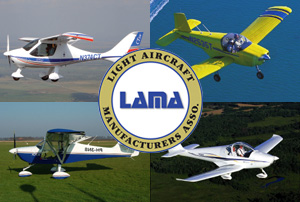 Odds are you’ve heard of LAMA, the Light Aircraft Manufacturers Association, founded in the earliest days of ultralights and gaining renewed importance in this era of Light-Sport Aircraft. Most leading LSA businesses (not only manufacturers) are members; look for the LAMA logo on many websites. *** For 2007, the LAMA business organization has a new trick up its sleeve: a consumer program whereby a qualifying manufacturer can apply a LAMA decal to each LSA produced according to ASTM standards and which has successfully completed a third party compliance verification audit. Sounds pretty dry, yes. But it is critical to lend greater credibility to the ASTM consensus standards. *** A manufacturer declares his airplane compliant. LAMA sends a contractor to assure the standard was properly met. In the future LSA consumers should look for the LAMA decal to know it was built by a company whose compliance documents and processes have been verified. FAA
and EAA have voiced very strong support for the audit and decal program.