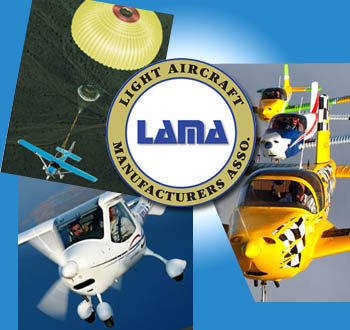 These days, “oversight” is a heavily used word on national media. But far from the strangeness of government bailouts is the world of Light-Sport Aircraft. For the new aviation sector, industry oversight is seen as critical by LAMA and many aviation leaders. *** A conversation with LAMA founder* Larry Burke shows the LSA industry organization is moving steadily toward its oversight goals. Insurance companies and others hope LAMA will audit companies supplying 80% of purchased LSA. Once that “critical mass” is reached, insurers feel they can advise customers do as LAMA encourages…”Look for the LAMA Label.” *** A LAMA audit verifies that a company which declares compliance to ASTM standards actually possesses the documentation to prove their declaration. After successfully passing a LAMA audit, a company can place LAMA Labels on their LSA so that potential customers are aware the company has satisfactorily completed a voluntary third party audit. *** LAMA is presently working with 11 companies (see photo legend) and negotiating with more. These 11 companies represent more than 50% of airplanes being delivered. Yet to illustrate the “teeth” in the audit program, 8 of 11 companies were asked to produce additional documentation (all did). *Full disclosure: I am LAMA’s chairman and acting president.