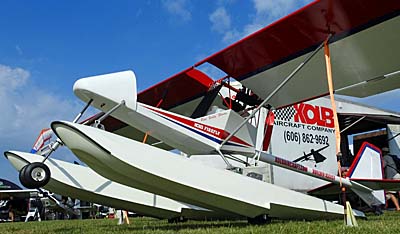 Maybe you never flew a floatplane or seaplane (the latter implying a hull). If that’s true you are missing one of the singular pleasures of flying. Landing on water is almost unreal. It seems unlikely but when you find yourself about to touchdown on a lake, you know you have arrived in a way few people in history have ever considered much less achieved.

Alas, the cost of having that dream become reality is substantial. A general aviation floatplane easily runs half a million dollars new, probably much more. Even used, a floatplane is a very costly purchase. Because of their scarcity, a seaplane (with a hull) will cost you even more. Even the most modestly-priced LSA on floats can be a rather expensive proposition.

Along comes Part 103 to save the day. While Light-Sport are affordable compared to, say, a new Cessna 172 on amphibious floats, nothing can compare with Part 103 ultralight vehicles on wheels or floats. In the genuinely affordable space your optimal choice is an ultralight.

You can own a Part 103 ultralight vehicle (not “aircraft”) — on floats — for around $30,000. At the price of the average new car, this is a extraordinary value. Is it a fantasy I’m having? No! Here is some reality.

In the nearby images you see a customer’s Kolb Aircraft Firefly on Puddle Jumper floats. It could cost as little as $25,000 on straight or non-ampibious floats. Land and water options plus added equipment will increase that number but compared to any new seaplane anywhere, Firefly on floats represents a spectacular bargain. For a well performing fixed wing with a wonderful brand name, FireFly on Puddle Jumper floats makes a great choice. (Add too many options and not only your price goes up but your aircraft may no longer fit in Part 1o3, should the freedom of FAA’s simplest regulation be important to you.) 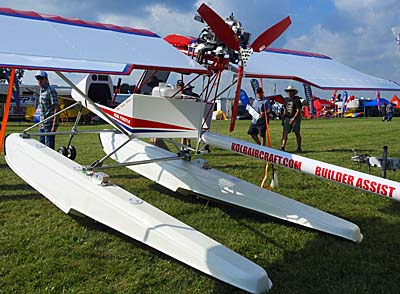 If you must have two seats, FireFly loses out, being designed expressly to be a single seater. Nonetheless, if budget is a primary driver for your airplane purchase, as it is for most people, the FireFly on floats looks to be a highly attractive option.

Kolb’s Firefly (video) flies wonderfully well. It fulfills the Kolb brand — begun by an industry pioneer named Homer Kolb, since deceased — by offering superb handling and great performance in one of the easiest-to-fly taildraggers offered to pilots.

If you think I’m being too kind to Kolb, you probably haven’t flown one. Homer’s achievement is like that of Dick van Grunsven, creator of the RV series of Kitplanes, the world’s most popular kit-built airplane series of of all time. Van’s has sold more but Kolb has a record of which it can be very proud. 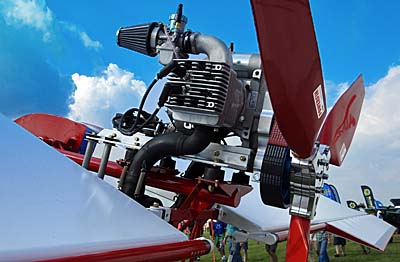 With the 50 horsepower Hirth F-23, FireFly on floats should be a highly energetic performer.

At an affordable price for a great flying aircraft with a wonderful history, you can hardly get more enjoyment per dollar invested than Kolb Firefly on floats.

If you wish to read the full, unedited text of FAA’s guidance to field offices regarding Part 103, click this link for a PDF version of FAA’s official word on float weight (and parachute weight, and more).

Click this link for Kolb’s factory information about FireFly.

Watch for our video interview with Kolb boss Brian Melbourne as soon as editing can be completed. (Please be patient: we’re still at Oshkosh and the editing effort runs two days to a week per video; we will likely record well over 30 new videos in the week of AirVenture 2018.)