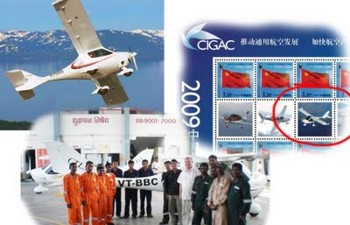 My former rock-and-rollin’ Sport Pilot flight instructor and flying buddy John Lampson and I took advantage of the gorgeous New England fall weather yesterday to sharpen up with a Flight Design CTSW thanks to another old flying pal, Flight Design USA prez Tom Peghiny. *** John and I revisited the spirited handling of the SW by jumping up to 3,000 feet and cruising through glass-smooth air over the lovely Connecticut and Massachusetts countryside, cloaked now in the gray wiskers of leafless trees. *** I also caught up with some of the latest developments for the company, including the new postage stamp released in China featuring the CTLS. *** The CT is the only LSA in the aviation stamp series, which also included GA aircraft from Cessna, Cirrus and Diamond. *** I wonder if President Obama is being made aware that private aviation is beginning to happen in China, as airstrips and infrastructure are being built all over the country for a burgeoning middle class that wants to fly. *** India is also growing a private aviation sector. The first two CTLS were just registered in India and will be used for flight training. *** Meanwhile, back at the ranch, Flight Design USA added three new flight schools to its Flight Design Pilot Center (FDPC) network. The company now numbers 19 flight schools using its LSA, and 38 flight instructors specifically trained to teach in the CT line. *** The latest additions are LSA New England, Hampton, NH, Copper City Aviation Services, Brisbee, AZ and Pilot’s Choice Aviation, Georgetown, Texas. *** Flight Design believes they’ve set up the largest LSA flight center program in the U.S. *** Finally, to counter those naysayers you come across now and then who suggest LSA are not up to the rigors of regular flight training, Flight Design offers this interesting rebuttal: a German-registered CT2K, the long-wing, first-gen model of the best-selling CT line, just logged its 13,268th landing! *** The milestone event went down at Jesenwang (say that three times fast) airfield in Germany, where it’s been in service as a flight school basic trainer since 2003. The plane has racked up almost 3,000 hours of flight time, is on its second Rotax engine and still operates daily at the 1,300-foot strip. *** In consideration of the global economic crisis, Tom P. notes in a recent release that “We have quite a few airplanes in daily revenue generating operations…It only takes about five active students to make this plane completely self funding.” *** FD Germany adds that the general word from the field is CTs spend very little time in the shop. That’s good news for any flight operation. *** Bringing it all home, I learned to fly in the CTLS but, as John L. and I rediscovered yesterday whilst hopping in and out of Rob Albright’s grass strip at Crow Island, MA, the CTSW remains one sweet, fun, fast, sporty LSA that really is fun to fly. *** —photos courtesy Flight Design. CTSW photo shot by John Dunham