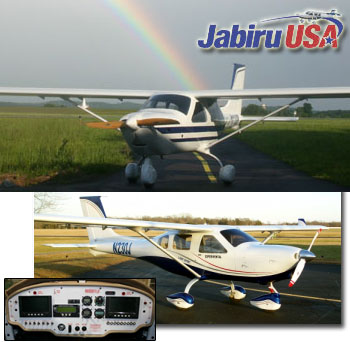 Jabiru USA’s new J230-SP has the same cavernous three-door cabin as the J250 (top) but has a higher aspect wing fitted with winglets that cruises efficiently at altitude. Panels can be full glass. More info?

SEBRING 2008 UPDATE — Like rapid fire, approvals and preparations for the Sebring Expo are coming quickly. In less than a month before Sebring we’ve seen approval of the SeaMax amphib; Rans’ all metal S-19; the super-wide S-Wing; all-new Flight Design CTLS; composite Dynamic WT9; long-gliding Lamabada, and many upgrades to the Thorpedo 120LP and 85LP. Now, welcome the fourth Jabiru: J230-SP. *** Good for flight schools, Jabiru USA president Pete Krotje added, “It’s ideal for those longer cross country trips.” J230-SP has achieved European JAR/VLA certification and Pete elaborated that J230 is one of the most tested LSA in the world because it passed all of the FAR Part 23 testing for strength, stability, and spin recovery. It has been drop tested from five feet at its design gross weight of 1,540 pounds with no serious damage. When operated at a gross weight of 1,320 pounds, design strength is reported to exceed ASTM standards by a good margin. *** Looking similar to the J250 (photo) J230-SP differs only in a wing design that employs a 105 square foot wing with winglets. “These winglets seem to give an effective increase in wing area that really helps low speed performance,” said Krotje.