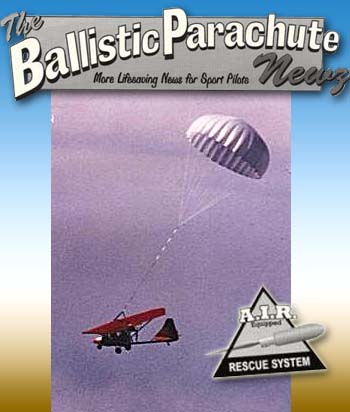 Rocketing Back — While John Dunham gets his new website up, you can explore current offerings and read his historical blog. I predict a lot of underserved light aircraft customers will welcome the re-entrance of Second Chantz with enthusiasm. For more info: Call 775-315-0133 or email Second Chantz.

Once Upon a Time… Two companies competed vigorously for the airframe (ballistic) parachute market. One was BRS. The other was Second Chantz, run by longtime proprietor and system designer, John Dunham. In a deal back in 1995, John agreed to cease competing with BRS, which went on to fame and fortune with the parachute for Cirrus airplanes and LSA. *** Now, zap forward a decade and a half. BRS is working hard to be a military contractor, and — while still pursuing the airframe parachute business with a couple larger customers — their corporate focus is elsewhere. I say “good luck with that” but the light aircraft community badly needed another company to offer services: repacking, repairs and maintenance, and new systems for aircraft BRS had no time to assist. *** Why start a company now, after 15 years of being out of the business, and with the country in a deep recession? John answered simply, “It’s what I know and love.” *** Before selling out to the larger company, Dunham had started developing a compressed air rocket motor that had great promise fifteen years ago. The idea languished but today technical improvements make that concept much more viable thanks to much increased stored pressures. John will pursue his “A.I.R.” system as he rebuilds his former business (well, technically a different business but the mission is the same). *** John stated in a recent news release, “Second Chantz will distribute new ballistic recovery systems manufactured by the Czech Company, Stratos 07, known (to Americans) as ‘Magnum Parachute Systems’.” [UPDATE 6/10/10 — Second Chantz elected not to become the distributor for Magnum.] “And we will bring back [our] patented A.I.R. equipped recovery devices for hang gliding and paragliding pilots.” In addition, thousands of Second Chantz systems can now be serviced by the company that originally made them. And, the new company could establish service for BRS systems. *** In all, this is a significant gain for the light aircraft community.