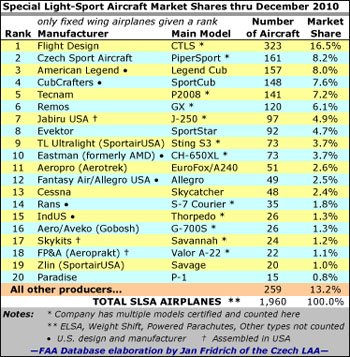 You just have to marvel how a dynamic new industry unfolds. No matter your level of expertise — in or out of government, large or small private organization, or even as an individual guru — no one can exactly foretell the future of the grand experiment we call Light-Sport aviation. *** So, what’s the irony? After all the years I’ve released the results of Jan Fridrich’s laborious market share assessments using FAA data, one company has finally displaced perpetual #2 producer, American Legend. The star that rose is, of course, Piper, who not quite one year ago announced they would distribute the then-Sport Cruiser. That model (with its own winding tale) had done respectably well on its own and Piper’s legacy brand brought an impressive growth spurt even during a very weak economy. Yet, even as Piper rose from 6th place last year to dislodge the Legend Cub producer, the Vero Beach outfit ended their relationship with Czech Sport Aircraft. Who could’ve predicted that… in less than one year’s time? Many eyebrows were raised at the revelation. *** The news story continues to unfold with PiperSport/SportCruiser dealers forming an association to continue U.S. sales and service. I’ll have more on that development after Sebring, which starts tomorrow. *** Meanwhile, Czech Sport Aircraft released news saying that they concur with the Piper statement that spoke to a difference in company philosophy, adding that CSA wishes “to continue to distribute CSA aircraft worldwide and does not want to focus on the US market only.” CSA also reports that the name PiperSport will change to SuperCruiser. Update 2/6/11 — The name change won’t happen, says U.S. Sport Aviation, the company taking over from Piper. They’ll continue to represent the SportCruiser. —DJ *** In other noteworthy changes, Cessna has now risen to 13th from not being on the chart at the end of 2009. CubCrafters rose from 5th to 4th. As these changes occurred, Tecnam slipped from 3rd to 5th and Remos from 4th to 6th, both leading producers reflecting the challenges of a troubled economy. However, Aerotrek continued its deliberate but steady rise from 12th to 11th and TL Ultralight distributor SportairUSA rose from 10th to 9th (a technical position as it rose to tie AMD, which changed hands and is now known as Eastman Aircraft). *** SportairUSA started representing the Zlin model that it rebadged as the iCub. A related story is Jabiru USA and Arion. The latter has 11 registered SLSA joining a growing fleet of some 80 kits. Though legally organized as two companies, the sibling companies complement one another and if joined as one, have registered 108 SLSA, enough to allow them to join the exclusive “Century Club” of builders that have exceeded 100 units registered.