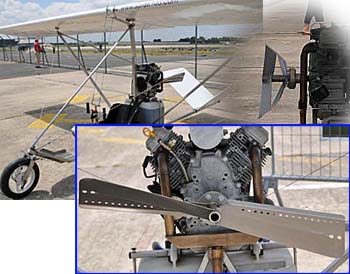 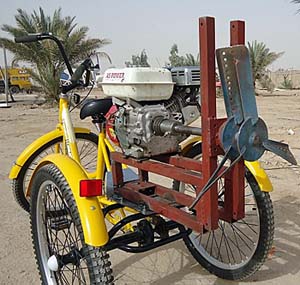 In Iraq, prop test beds may look a bit different. 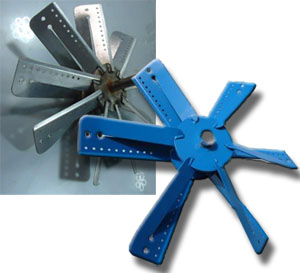 Multiple blade configurations have been tested. 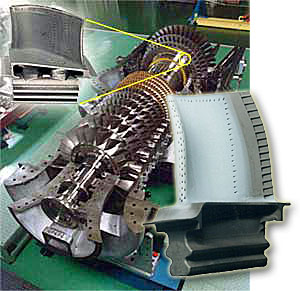 The inventor of the Blade prop indicated some of his concepts might be applied to turbine engines.

“I am an Iraqi inventor,” wrote Mahmood H. Hussain, “I have patent number 7396208 about a new blade that can be used to make propellers or turbines.” Take a look at the Divided Blade Rotor from, of all places, Baghdad, Iraq. Now, Americans — and for that matter citizens of many nations — are likely surprised by any aviation invention from Iraq. That may not be fair, of course. Despite the country being upset by war, controversy, and deep religious divisions, intelligent people can still do innovative work. Yet what have you heard about aircraft developments from Baghdad that does not involve the military? Virtually nothing … however, a few days ago I got email from Mahmood because he discovered an article I wrote years ago after a visit to a French airshow called Blois. At that event I saw a fascinating superlight aircraft called the Spratt Controlwing. The airplane is worthy of a story itself — the controlwing concept is also interesting — but Mahmood typed, “I write to you from Baghdad because of my blade on your website … but you did not mention anything about my invention.” (The Spratt aircraft I examined had a conventional wood prop as a photo near the end of the article showed, however, it was subsequently fitted with Mahmood’s Blade prop.)

Engineers or designers among readers of this website may wish to go examine the patent but the introductory paragraph about the Blade prop reads, “A novel rotor blade is presented with an integral tip portion from which two diverging blade portions extend to separated respective roots. The Blade may have conventional airfoil sections, or may be made from flat or curved sheet material.” Simplistically, the Blade prop is a type of joined-wing technology. The prop tips are connected — adding significant strength — and the lead blade is perforated with “bleed ports,” to delay or prevent cavitation, turbulence, and stalling. The two blade components have different angles of incidence. The patent description continued, “Most conventional rotor and propeller blades are relatively long and are entirely unsupported along their length. Accordingly, they must have relatively large root sections in part to obtain sufficient strength to prevent bending and twisting in ordinary use.” The text continued, “Conventional rotor and propeller blades are also relatively noisy, and the wasted acoustic energy represents a significant inefficiency.” The Blade prop is said to benefit from qualities such as: stall resistance, quietness, strength, lightness, and ease of manufacture.

Mahmood wrote, “My invention (Divided Blade Rotor) is something new in aviation world, which since 1903, is still using the same kind of propeller blade.” His propeller design, as described in his patent application, would have a finished outside diameter of 850 mm (33 inches) and when turned at 2400 rpm, would develop over 200 pounds of static thrust. The required shaft power at 2400 rpm is expected to be 30 horsepower. Think about that. Two hundred pounds of thrust is roughly half that needed for a 1,650-pound, 100-horsepower Cessna 150, yet the prop is a mere 33 inches in diameter and is reportedly much quieter. According to Mahmood, it could be far cheaper to manufacturer and it could be made of very durable materials, even steel. “The divided blade of the invention does not stall at high angles of attack [as much as 45 degrees], due in part to its rigidity, and in part due to the use of the leading edge holes.”

Many readers may be more technically competent than I to evaluate the capability of the divided blade rotor that Mahmood has developed. I have listed what I see as it’s advantages but I am not equipped to test the concept. Still, I believe new ideas have merit and deserve review by those more qualified than me. I have long restated an old line that goes, “Once upon a time a wing was developed and ever since, designers have merely modified the concept in myriad ways.” Regardless of the accuracy of that statement, it does seem unusual when something genuinely new comes along in a mature industry such as aviation. Some may add that engines of the future are turbine and that anything with a prop is “old fashioned.” I don’t believe that but Mahmood sees application of his ideas to turbine blades as well. I’d love to hear from the technically astute among ByDanJohnson.com readers about their opinion of Mahmood’s blade prop. Thumbs up or down, this seemed a story worth telling.