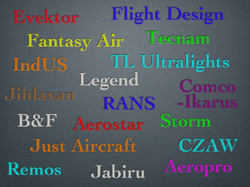 Taken from my talk at last year’s AOPA Expo in Tampa, this screen shows many of the top brands in the LSA field. Most are not well known, whereas Cessna brings an established brand name and a infrastructure that may prove useful for all.

Industry response was swift and varied to Cessna‘s announcement that the big manufacturer will study the LSA market for a possible entry. Also, an earlier announcement from EAA was updated to reflect that the Cessna mock-up (now called a “proof-of-concept” display) will be south of AeroShell Square…which means just north of, but very near, the LSA Mall. Sportair USA president Bill Canino said, “We welcome Cessna to the LSA market; it is a tremendous impact to see a large player in our sandbox.” Others expressed curiosity as to what Cessna might bring to market, “If [Cessna’s LSA] is a ‘152 Lite,’ it may not be that appealing…[yet] this will legitimize sport planes particularly with flight schools.” Flight Design‘s Matthias Betsch and his U.S. importer Tom Peghiny also find Cessna’s potential entry to be a validation of their efforts and repeated the feeling that this will help convince flight schools that LSA are viable for training use. Others remain nervous, saying the big company’s entry could mean “the death of many imported planes.” Time will tell, but come to AirVenture 2006 and judge for yourself.