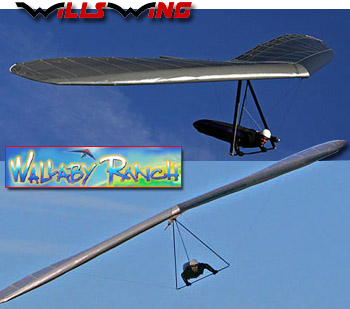 A modern Wills Wing T2C (“C” for Carbon) is among the highest performing hang gliders, selling for $8,285 and weighing only 73 pounds. Many find hang gliding to be the purest form of flying that delivers a birdlike or Superman sensation, which pilots flying only powered, enclosed aircraft cannot truly imagine. More hang gliding information.

This year Wallaby Ranch proprietor Malcolm Jones conveniently scheduled the 11th annual Wills Wing Demo Days event about a week before Sun ‘n Fun. In remarks Saturday night to a jammed-full tent, Wills Wing hang glider company president Rob Kells declared, “This is the largest gathering of hang glider pilots on the planet!” The large crowd was an active group, too. Rob also announced 676 tows had been made (launching hang gliders) during four-plus days of excellent flying conditions. *** Demo Days is a marketing concept where Wills Wing sends out an over-sized trailer loaded with new hang gliders, dozens of them in various models. Qualified enthusiasts from far and near demo flew them for free. California-based Wills Wing, one of the world’s top producers, makes their biggest eastern outing at Wallaby. A fleet of tugs, southern hospitality, a safety-first attitude, and great winter weather makes Wallaby the choice location. Wills Wing management — a team of four — has been consistently at the helm for 30 of the company’s 35 years. Those four have performed their jobs so well for so long that the brand has produced 22,000 aircraft, a benchmark very few aviation manufacturers have reached.