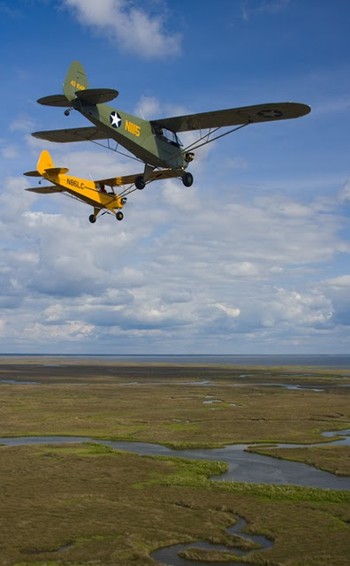 Those hard-working stalwarts at Legend, the number one U.S. producer of LSA, keep finding interesting things for folks like me to write about. • Trish Jackson is an Ohio native who flies Airbus freight carriers all over Europe. She learned flying from her mother at age 13 and still remembers a memorable quote mom made on a flight: “Look at these rivers. It’s like God carved them out with his finger.” *** Trish owned a vintage Cub at one point in her career, but a couple years ago felt the urge to own one again — a brand new one. She kicked some tires and lit some fires for a year or two, then took a Legend Cub demo flight. *** Last April she joined the annual Legend rite of spring gaggle — a trip I had the distinct pleasure of making in 2008 — to fly formation with a bunch of Legend Cubs from Sulphur Springs, TX to Lakeland, FL for the annual Sun ‘n Fun spring flyin. *** That sold her. *** “It was the attention to detail,” she says of her decision, “and it’s open cockpit flying.” *** Imagine climbing out of a heavy and into a Cub on the same day…what could keep you sharper than that? • Sass and class: the Legend Cub can be ordered with Garmin G3X displays, a telling meld of classic flying and ultra-modern digital situational awareness that extols the marvelous opportunities we have in LSA flight. *** All those functions — real-time weather, terrain, METARs, NOTAMs, PIREPs, traffic and more — can come in real handy whether you’re tooling around in open class G [airspace] country or joining the pattern at a major commercial airport. *** The Garmin G3X glass cockpit packs a ton of info into its displays, including attitude/directional guidance, electronic engine monitoring, moving-map GPS, airport diagrams, synthetic vision and more. • Looking ahead to the 75th anniversary of the Piper Cub J3 in 2012, what a hoot it would be to fly a Legend Classic J3 into Oshkosh or any other airshow. *** Legend’s new Classic is an updated-but-faithful version of the J3, at a $94,000 price. *** Updates include sliding left window, electric start, disc brakes (careful with those!) and other modernizings to enhance safety while staying true to the original, immortal J3. *** Must. Save. More. Money and get my own…I say that a lot about new LSA I get to fly, but since I’m building some skills in a 1946 J3 these days at my local airfield, I’m currently all swooney over the wonderful Cub…all density-altitude-struggling 65 horsepower of her. *** Next time you’re at an airshow, stop by and say hello to owners Darin Hart and Kurt Sehnert and stalwart crewfolk like Pat Bowers: they’re part of what makes covering the LSA scene such a pleasure.