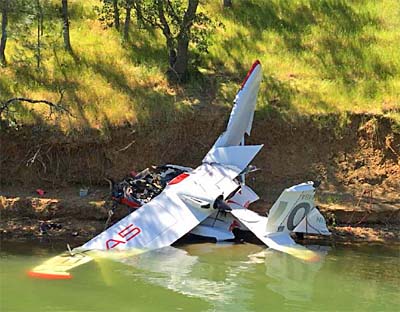 According to the Napa Valley Register relating a National Transportation Safety Board report, “Pilot error caused the crash that killed two men in a small airplane on May 8, 2017 in Lake Berryessa.”

NTSB wrote, “The pilot, Jon Karkow, of Icon Aircraft in Vacaville, was flying too low, and mistakenly entered a canyon surrounded by steep rising terrain.” The investigative agency said Karkow had taken off from the Nut Tree airport in Vacaville at 8:50 a.m. accompanied by passenger, Cargi Sever, a new Icon employee. The pilot intended to take Sever on a familiarization flight in the Icon A5 amphibious Light-Sport Aircraft, said NTSB.

“It is likely that the pilot mistakenly thought the canyon that he entered was a different canyon that led to the larger, open portion of the lake,” NTSB stated. “Additionally, it is likely that, once the pilot realized there was no exit from the canyon, he attempted to perform a 180° left turn to exit. Based upon performance information, the airplane would have not been able to climb out of the rising terrain that surrounded the area, which led to his failure to maintain clearance from terrain.”

Readers may examine the full NTSB report. That report states that the airplane appeared to be operating normally at the time of the accident, noted Icon. “A post‐accident examination of the airframe and engine revealed no evidence of any preexisting mechanical malfunctions that would have precluded normal operation.”

“It’s been a challenging year for sure,” said Kirk. “It was always Jon’s dream to do a production aircraft that embodied the fun of flying in its purest form. The A5 represents that vision and we are committed to carrying it forward in his honor.” The company offered this thoughtful tribute to Karkow. 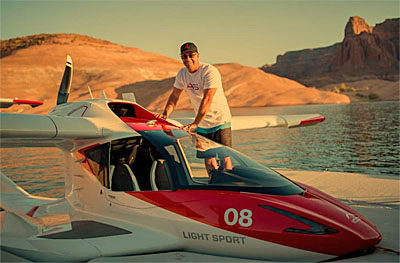 Entrepreneur Julian Gates enjoys his A5 in Southern California.

Icon reported delivering six  A5 LSA to customers in June and July. “These are the first customer deliveries the company has made since announcing a production delay last spring,” said Icon. The owners are located in Washington, California, Montana, and Texas.

Early customer Mike Sievert of Seattle, Washington said, “A5 is so easy to use and Icon has gone above and beyond with the flight training, maintenance preparation, and the plane itself.”

Another new owner Julian Gates, reported flying his A5 to Lake Powell over the 4th of July weekend. “I admit I was a little concerned at first given the 3,600-foot lake elevation and temperatures over 100°F every day,” Gates said. “While you can certainly feel the effect of the 8,000-foot density altitude, we flew the aircraft daily at gross weight off the water.” 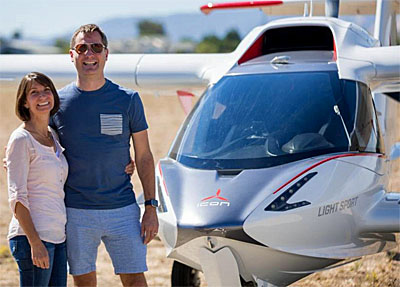 Mike Sievert is COO of T-Mobile in Seattle, Washington. He poses by his A5 with wife Suzanne.

New owner Bill Harris, a Silicon Valley entrepreneur, took delivery on one A5 and has a second on order for the east coast. “A5 a blast to fly,” he exclaimed. “It inspires me to explore in a way that no other airplane does.”

In my interview with Kirk Hawkins, I probed about Icon’s plans for the future.

“We have completed our own state-of-the-art composites manufacturing facility in Mexico to build carbon fiber airframes at high rate.” I asked if this was a wholly owned facility. Kirk confirmed that while a contractor built the facility, it will be operated by Icon officials that have experience working in the country. “The new facility is has started supplying airframes,” Kirk said. “The first model year 2018 A5s with Icon-made airframes will be ready for delivery in September, 2017. A5 production will ramp up gradually for the remainder of 2017 and then accelerate rapidly throughout 2018.” 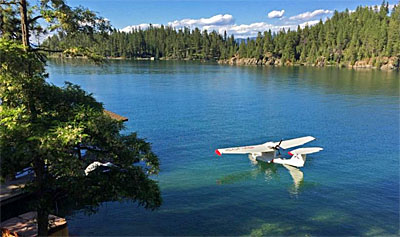 Another entrepreneur Andy Wilcox flies his A5 on lakes in picturesque Montana.

I asked specifically about the 135-horsepower Rotax 915 iS to come out this fall. While Icon will look at the engine, Kirk expressed no current plans to convert to the new powerplant, saying his engineers are very pleased with the performance from the 100-horsepower 912 iS Sport. Both these ECU-monitored engines collect data that can help optimize use of the engine. They can point to problems ahead of time when the data is examined by the Austrian company.

That helps mechanical problems arise less often but as the Karkow accident shows, the pilot still plays the primary role in operating the aircraft safely.

Watch our 25-minute video flight report on A5.