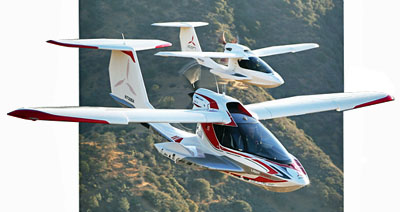 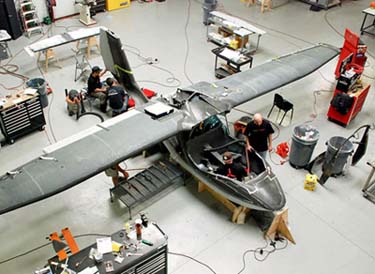 Icon technicians are photographed building one of the A5 prototypes seen flying in the image above. This work has taken place at the company’s Tehachapie facilities. 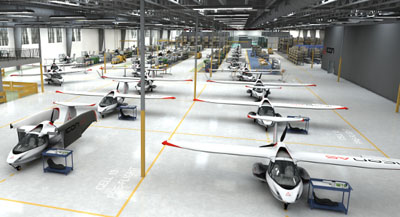 Icon’s Vacaville, California factory is portrayed in this artist rendering.

According to a report in the North Bay (San Francisco) Business Journal, Icon will build its first 20 A5 LSA seaplanes before the end of 2015. Certainly in the LSA space, this can best be described as “much-anticipated event.”

At an annual meeting of the Solano Economic Development Corporation, the Business Journal reported, guest speaker Kirk Hawkins of Icon provided an update on the production of the A5. “The first Icon Aircraft production planes are currently undergoing flight verification testing, and 20 of our A5 aircraft are scheduled to roll off the Vacaville production floor in 2015,” the Journal quoted. They added that Hawkins said production will follow the completion of construction at the facility in August, 2015.

Earlier the California company reported taking more than 1,250 aircraft deposits, which they said represents nearly $300 million in backlog. “By comparison, Tesla Motors had approximately $100 million in order backlog just prior to its production start,” Hawkins noted to the business development group.

More recently a man told me that he had placed an order and was given number 1526 though he could not confirm how the numbering started or advanced. Regardless of the actual order count, Icon has earned bragging rights as the LSA company taking the most orders of any company in the Light-Sport space. Even Cessna didn’t quite hit 1,000 Skycatcher orders and that project fizzled before production reached 300 units. For another number comparison (as reported in our 2014 LSA market share report), GAMA has stated that total single engine production worldwide was 986 aircraft in 2014.

“We want to scale our solution, not scale problems that may be found along the way,” Hawkins said, as reported by the Business Journal. “That is why we’re starting production with only 20 aircraft this year, rising to an estimated 400 deliveries in 2016 and eventually up to approximately 1,000 aircraft annually in the future, as we establish global awareness and a brand presence in the marketplace.”

Hawkins told the business development meeting attendees that he sees a “deep and pervasive global interest. Some 30 percent of our customers today are outside the U.S., and there is an aviation gold rush in China equal to that in the States.”

Hawkins told the group that Icon presently has 100 employees but that the company expects to ramp up to 500 within the next year and a half. In return for incentives offered by the community, job creation is an activity locals will follow very closely.

Several times I have visited Icon at their headquarters Los Angeles. In 2008 I toured their research and development and initial production facilities in Tehachapi, California. Now, the Journal reported, “In the third quarter of this year, all these functions will be consolidated in Vacaville when [plant] construction activities are completed.”

Along with many others, I wish Icon well at starting deliveries of this highly anticipated aircraft. I’m sure we will be hearing more as AirVenture approaches. They company has made the Oshkosh event their primary contact point.