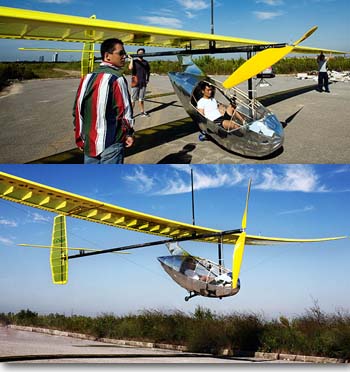 This superlight (84 pound) pedal-powered aircraft is built using techniques common to RC aircraft builders. It represents one of several projects taking to Chinese skies in a Do-It-Yourself movement. Photos are courtesy of the designer, Mao Yiqing, as first reported on Wired magazine’s website.

“Chinese New Year” invokes images of fireworks but here’s another take. We hear little or no recreational flying occurs in China, but that turns out to be wrong. According to an article in Wired magazine by by Michele Travierso, the Do-It-Yourself spirit exists even in that highly controlled country. *** A Chinese DIYer named Mao Yiqing has built a human-powered aircraft, which he calls Mozi (after the 5th century inventor of the kite), using his skills running Oxai, a company that builds RC planes. Mozi was built using many of the same techniques and materials — balsa wood, styrofoam and carbon fiber — as his model planes. *** Wired reports, “His workshop is covered with pictures of Eric Raymond, an American pilot who flew his solar glider across the United States and, in June, over the Alps.” Yiqing is preparing his plane, which weighs 84 pounds and has a wingspan of 81 feet, for a 4-mile flight across Dianshan Lake near Shanghai. *** According to the Wired journalist, “Garage builders and innovators are, like their products, often called shanzhai. Literally translated, the term means “mountain strongholds,” but it has come to mean nonprofessional or clandestine manufacturers turning out products from the basic to the highly sophisticated. *** The Wired website also offers a short YouTube movie of another DIYer flying his gyroplane, which he built for the modest sum of $1,600. It makes a good New Year’s Eve read… go enjoy!