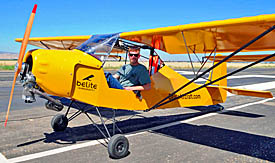 Film crews work on the Belite. photo used by permission of Belite Aircraft 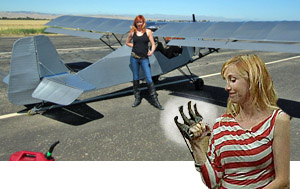 James Weibe is a different sort of airplane pioneer. He doesn’t make an LSA. He bought the rights to the former Kitfox Lite and has gone through several iterations of changing and improving the airplane. This makes sense considering his background in the computer accessory field, where he learned the constant upgrade path so common in the tech industry. *** Belite’s aircraft can meet Part 103 and other variations are Experimental Amateur Built. Evidently that wasn’t enough work, so Belite also developed a line of superlight instruments. Just keeping up with this prolific fellow tires many folks. However, he also knows how to reach outside the aviation community. For example, on TV… mainstream TV. *** When I was a kid, I used to say, “Just scotch it.” I mean that Scotch (brand) tape could fix anything, or so my young mind thought at the time. Apparently, duct tape is the new Scotch tape, at least for aviators trying to fix tears on a fabric-covered aircraft. But, Mythbusters TV show asked, “Can an airplane actually fly covered only in duct tape?” The answer is, yes, it can. *** Mythbusters TV personalities Kari, Grant, and Tory patched up an airplane that had been mauled by a bear. Well, OK, not a real bear. It was Kari Byron using a mechanical claw. The show’s storyline was invented from a true incident about two years ago when an Alaska pilot used duct tape to repair fuselage and tail damage to his Super Cub after it had been attacked by a bear. *** In genuine Hollywood fashion Mythbusters went the distance, not merely patching with duct tape, but covering an entire Belite with the silver sticky stuff carefully striping the Belite vertically and horizontally (photo… yes, that’s all duct tape!). After a very short flight without a turn, they found no tape had come loose; the Duct Tape Belite had achieved flight. *** James Wiebe flew the plane during filming in June. And therein lies the real story, in my opinion. Through his duct-tape-airplane suggestion, James put light aircraft on national television. Mythbusters reaches about two million Americans, many of them younger people, with a science-is-fun message. I think it’s great James got his bird on the show… heck, as the star of the show. OK, the Belite and duct tape.
Wiebe’s blog noted that the Mythbusters show drove so many people to Belite’s website immediately after it aired that their website crashed. Another proof that even in an age of mobile Internet devices, television still plays a major role in global culture and communication.