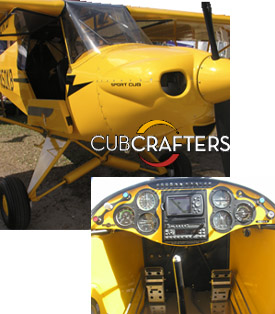 Sport Cub makes use of carbon fiber components and careful design to hold its weight down to 825-860 pounds depending on options chosen. In ASTM standards, a minimum useful load is specified, so no 2-seat SLSA with 100 horsepower may have an empty weight greater than 890 pounds. Read my pilot report in the July 2007 Sport Pilot.

I admit to being somewhat surprised at the success of the LSA Cubs. We have no less than three brands with SLSA approval: American Legend, Zlin Savage, and CubCrafters. Two of these (Legend and CubCrafters) are in the top ten of Light-Sport registrations and account for an astounding one in six LSA in the USA (by itself Legend represents about one in eight). Despite a tendency to lump them together, they are distinctly different offerings. The Zlin Savage is the only one using a Rotax 912 engine and it is still selling for the remarkably low price of $60,000. Legend is…well, already a legend and can be powered by Contentinal or Jabiru. Though CubCrafters earned certification later — despite being a Part 23 production facility — the Continental-powered Sport Cub is the most deluxe of the trio, and is priced to match (more than $100,000 with options). But the Washington state company worked hard to keep their airplane lighter, to be sure it qualifies with ASTM standards.