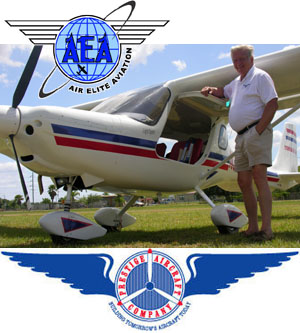 Air Elite Aviation is the U.S. distributor for aircraft built in the USA by Prestige. AEA proprietor Rodger Whaley poses by the first American-built Storm Rally, whose gull-wing doors can be opened in flight at speeds of 60 knots. Look for my upcoming Rally pilot report.

In the auto industry “hybrid” infers the use of multiple technologies (think: Toyota Prius). In aviation, hybrid could mean an airplane designed in one country and built in another. Even Boeing farms out subassemblies worldwide, integrating them in America. Car companies coined “domestic content” to state what portion of a car is “Made in the USA.” *** We’re doing it in LSA, too. Besides the Storm Rally (photo), Jabiru 170 and 250 and the Delta Jet 912 trike are hybrids. The Italian-designed, Canadian-owned, Skykits line is U.S.-built. *** Prestige Aircraft is the licensed manufacturer for aircraft designed by Storm Aircraft of Italy. Like Jabiru USA, Prestige brings in major components, assembles them, and finishes with U.S.-sourced elements, which better addresses the American market. Storm Rally comes with basic VFR flight instruments and equipment, including a turn-coordinator, tail-strobe, Icon 200 radio, and Garmin transponder with altitude encoder. Somewhat unusually, Prestige models also come with a limited 2-year, or 1000-hour warranty.