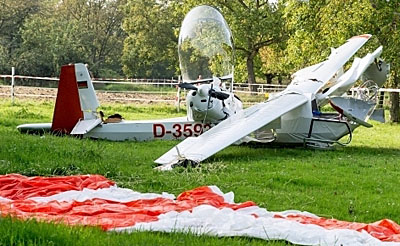 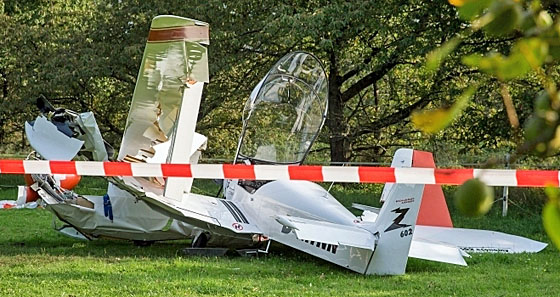 It wasn’t supposed to work out this way, but three people in two aircraft were saved when a European ultralight used an airframe parachute to save everyone. On Sunday, September 7, 2014 — commonly, these things happen over the weekend when recreational aviation is often pursued — at the German airport Koblenz-Winningen a Zenair CH-601 and K-18 glider collided in midair. During the collision, the planes became hopelessly entangled. The pilot of the CH-601 activated his Magnum Rescue System manufactured by the Czech Stratos07 company and the aircraft descended as one safely to the ground. Two occupants aboard the CH-601 plus a 17-year-old pilot of the glider were able to walk away from the aircraft with what was reported as “slight injuries.” One aircraft apparently struck the other almost perpendicularly in a classic “t-bone” mishap. Such accidents are bad enough between two cars, but when airborne such an incident can often be fatal to all aboard both aircraft. The parachute’s performance was likely aided by the substantial drag afforded by two aircraft, slowing the descent speed somewhat.

The Czech-designed, German-distributed Magnum Rescue System is only designed to handle an ultralight aircraft with maximum permitted gross weight of 472.5 kilograms or 1,042 pounds (including the weight of the parachute system, about 35 pounds). Fortunately these systems are designed with safety margins and the Stratos07 canopy proved to have an ample reserve making a most unfortunate event end without loss of life. Midair collision is one of the most threatening situations referenced by sellers of airframe parachutes. No matter the faults, after such a dramatic collision (photos) these pilots had zero chance to guide their aircraft safely to an emergency landing. Other possible deployment scenarios include: engine out over unlandable terrain such as trees or water; significant loss of control such as a damaged aircraft elevator or other component; serious medical trauma for the pilot with a non-pilot passenger; or loss of engine power at night with little or no visibility. In these situations the pilot or person electing to pull the parachute handle has a tough decision that must be made swiftly under great duress: try to fly the airplane to an emergency landing with the hazard that below a minimum of about 300 feet AGL, the parachute will no longer help, or deploy and become a passenger of an unguided aircraft.

Thanks to Mary Grady of AVweb for bringing this to our attention. Find her story here. Mary requested and I passed along some names to contact but those persons were not able to help so Mary used the broad reach of the Internet to find details. In her article using information found on a German website she quoted a police spokesperson, “The 17-year-old pilot of the glider was lucky. Without the parachute [of the] ultralight … he [would have] crashed into the ground,” the police representative said. Mary reported that two people were on board the ultralight aircraft, a man and a woman, ages 29 and 32. Parachute touchdown speeds are higher than you may think. Engineers create a survivable landing at a higher rate of descent over a softer touchdown that brings with it higher cost, higher system weight, and greater bulk, all of which may be seen as negatives that can cause aircraft owners not to choose a parachute. The parachute business (in which I worked for 18 years) has a tongue-in-cheek line: “If you ever need a parachute and you don’t have one, you’ll never need one again.” It’s a bit sardonic but I know I prefer flying with a parachute whenever possible as they offer a superb final option. I’m sure all three Europeans involved are feeling mighty good about airframe parachute systems today.

Thanks also to my friend and colleague, Jan Fridrich of Czech LAA and LAMA Europe, for providing information on this scary incident.