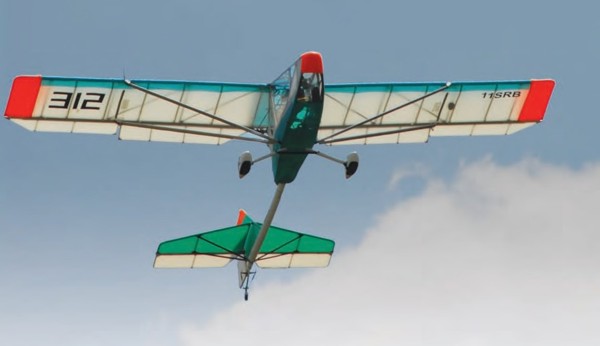 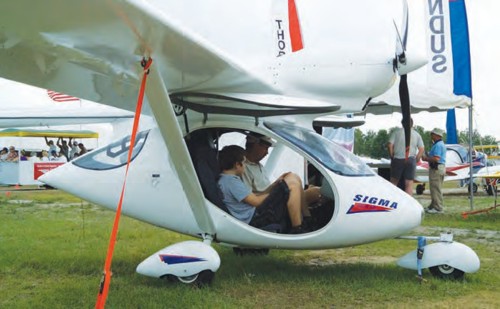 By Susan Parson
Photos by H. Dean Chamberlain
It may seem like it started only yesterday, but the Sport Pilot/Light-Sport Aircraft
rule (SP/LSA) celebrates its fifth “birthday” this summer. In many families,
making a “how-tall-are-you-now” mark on the wall is a time-honored birthday
tradition. In keeping with that concept, this article reviews and celebrates the mark
SP/LSA has made since it joined the aviation family back in 2004.
My, How You’ve Grown!

In developing the SP/LSA rule, FAA’s intent
was to increase safety by closing gaps in existing
regulations, accommodate advances in technology,
provide for the manufacture of light-sport aircraft
that are safe for their intended operations, and
several other purposes. A key idea was to make it
possible for more individuals to experience sport
and recreational aviation in a manner that is not
overly burdensome, but still safe.

Today, more than 2,000 individuals have
earned sport pilot certificates, and numerous
others have earned sport pilot privileges. Aircraft
manufacturers have developed more than 90 new
designs, and more than 800 factory-built special
light-sport aircraft (SLSA) are recognized under the
LSA rule. Many of these aircraft have high customer
appeal designs and features that could inspire a new
generation of pilots. In addition, many designs offer
advanced safety features, including devices such as
whole-plane emergency parachute systems, airbags,
and single-button avionics that can automatically
stabilize the aircraft.

One of the reasons for this rapid growth
is the LSA industry’s use of industry consensus
standards developed through ASTM International.
This approach allows for more rapid design changes
and also for quicker
incorporation
of changes and
features resulting
from safety
findings. It is
also consistent
with a national policy that directs U.S. government
agencies to use voluntary consensus standards in
lieu of unique-to-government standards wherever
possible. This practice helps eliminate the cost of
developing separate government standards and
decrease the cost and the burden of complying with
agency regulation. FAA and industry will continue
to develop and upgrade ASTM LSA standards as
circumstances require.

Because regulation of the LSA industry
is so different, here’s a quick review of how the consensus standards process works. It’s important to understand that the industry has been asked to take more direct responsibility for developing and maintaining standards for design, manufacturing, and continued airworthiness. Industry chose ASTM International to facilitate the development of standards for LSA. ASTM established the F37 Committee on Light-Sport Aircraft in 2004. Any interested person can join the F37 Committee. Several FAA employees participate on the committee in the standards development process, but FAA has only one official voter. The Committee revises existing standards or develops new ones in response to demand, regulatory requirements, or ASTM protocols.

Here’s where it gets a little tricky. ASTM provides its approved standards to FAA, but FAA does not “approve” ASTM standards. Rather, the agency “accepts” them and publishes its acceptance in the Federal Register. The agency also updates the LSA standards matrix on the FAA Web site’s Light-sport Aircraft page.

A final point: ASTM standards are not regulations. However, SLSA are required to be manufactured in accordance with the accepted consensus standard. That means that the SLSA manufacturer must monitor and correct safety-of-flight issues through the issuance of safety directives. The manufacturer must also have a continued airworthiness system that meets the identified consensus standard. The owner or operator of an SLSA must comply with each safety directive applicable to the aircraft, unless he or she uses an acceptable alternative means of compliance or obtains an FAA waiver from the provisions of the safety directive.

Many eyes are on the LSA industry’s safety record, and a number of safety monitoring initiatives have been established. For example:

NTSB’s SLSA Team. In early 2008, the | National Transportation Safety Board (NTSB) established a team to specifically examine the special light-sport aircraft industry, review its accident data, and identify potential safety issues or trends.
FAA Data Analysis. In addition to | coordinating with the NTSB, FAA conducts its own review of LSA-related safety data and takes action as needed. So far, FAA accident data indicate that in general, accident root causes are those common to other segments of general aviation (i.e., not unique to LSA).
FAA LSA Assessment Project. Also underway | is the agency’s LSA assessment project, which started as a result of discussions at the 2008 Joint Experimental Aircraft Association (EAA)/FAA Recreational Aviation Summit.Two of the project’s three phases have been
completed with data collected from 30 LSA
manufacturers, distributors, and aircraft
dealers. Preliminary results highlighted
several areas for improvement and the LSA
industry is working cooperatively with
FAA to address the issues identified in the
assessment project.
Industry and Government. Another
promising safety development is the
February 2009 creation of an FAA/Industry
LSA Joint Steering Group. The group’s
purpose is to address flight safety issues,
certification standards, and accident causes.
The group will release a charter defining
its membership and an action plan at EAA
AirVenture® this summer.

More than ever, FAA is committed to LSA
and has expanded its internal team to include
members from the Aircraft Certification Service, the
Flight Standards Service, Accident Investigation,
and Aerospace Medicine to help manage the
different areas associated with LSA. FAA shares
the hope that the still-developing opportunities
enabled by the SP/LSA rule will inspire a new
generation of aviation enthusiasts.