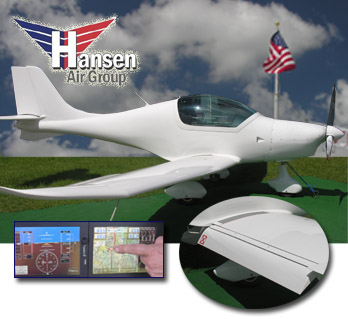 You probably know the Sky Arrow. This smooth tandem Light-Sport Aircraft from Italy uses exquisite construction and I found it to fly beautifully (read my report). Sky Arrow is imported by Jon Hansen and his family. Jon represented Tecnam aircraft (also of Italy) for several years, helping to launch that brand. Hansen Air Group and Tecnam ended their relationship a couple years back, and since then Jon and his team have been seeking another aircraft to represent. That search is over. *** At Sun ‘n Fun 2008, Hansen Air Group showed their new entry, the FA-04 Peregrine, built by Flaeming Air of Germany. The low wing beauty is mostly carbon fiber and was refashioned to be a Special LSA, following Flaeming’s success at winning VLA approval in Europe. Interesting Note: Hansen’s Sky Arrow also started with VLA approval, which helped it qualify as an SLSA. *** “The FA-04’s standard tricycle gear can easily be converted to a tail wheel by a certified mechanic,” reported Jon’s identical twin brother, Ron Hansen. Peregrine specs: span–31.5 ft; wing area–106 sq. ft; cabin width–44 in; empty weight–750 lbs; fuel capacity–26.4 gal; 75% power cruise–110 kts; climb rate–1,050 fpm.