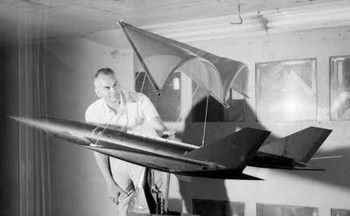 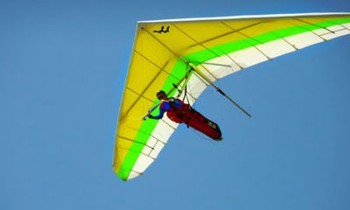 Sad news today that the father of hang gliding, Francis M. Rogallo, who I had the distinct pleasure to meet at Kitty Hawk a few years ago when I flew a competition on the dunes, has passed away at 97. *** That’s a nice old age for all to aspire to, but his passing will be marked by every “diver driver” who ever took foot-launched flight. *** “Rog” was universally beloved within the community, and stayed in touch with industry leaders and pilots who lauded him for his gentle good nature and indisputable place as the person who’s aerodynamic engineering creativity directly led to hang gliding, ultralights and todays light sport aircraft. *** Rog invented what came to be known as the Rogallo Wing as a National Advisory Committee for Aeronautics (NACA) project engineer in 1948. He got patents for the flexible v-shaped fabric/frame Parawing in 1951. *** NASA became highly interested in a capsule-deployable version in 1958 for bringing astronauts back home, but dropped the complexities of deploying the steerable design in favor of the round parachutes we know, which were deemed adequate for the mission. *** When photos and drawings of the Parawing hit the media, foot launched hang gliders were born, and the rest is history. *** Rest in peace, Rog. Your imagination brought personal, affordable flight to so many who would never have had it otherwise. *** —Photo Credit: NASA Langley Research Center