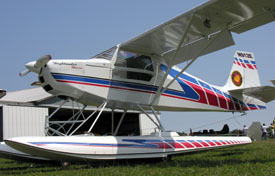 Highlander is the award-winning SLSA from Just Aircraft — judges at AirVenture and Sun ‘n Fun seem to love it. The design is factory prepared for float fitting such as this lovely example from Cornell Aero Works.

Summer fly-ins are an institution in recreational aviation. I attended one last weekend at Don Zank’s field near Bloomer, Wisconsin (north of Eau Claire). Of 50 or more planes that flew in, one was a handsome Just Aircraft Highlander “Marine” decked out in sleek amphibious floats. This time of year, while plenty of outdoorsmen pursue hunting and fishing, the amphib floatplane is versatile and desirable. Just Aircraft earned its SLSA airworthiness for Highlander — one of only seven American producers out of the 30 supplying Special Light-Sport Aircraft using ASTM consensus standards. Some customers are attracted to Highlander for its bushplane qualities. Others like its high useful load. Just Aircraft reports the 100-hp R-912 model weighs only 600 pounds empty, leaving a useful load of more than 700 pounds. With 18 gallons of fuel, Highlander claims a payload of more than 600 pounds though optional extras will cut into its carrying capacity. Click for specifications on the basic Highlander.