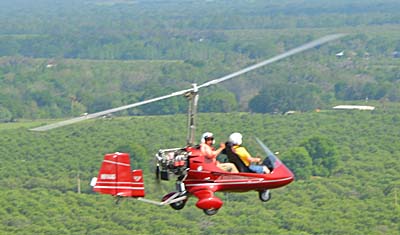 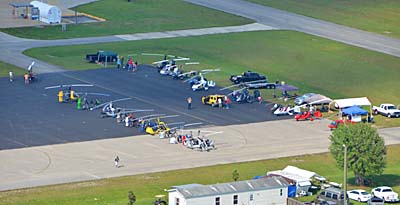 A selection of the gyroplanes on the ramp at the Wauchula Airport. photo by Roy Beisswenger of Power Sport Flying magazine. 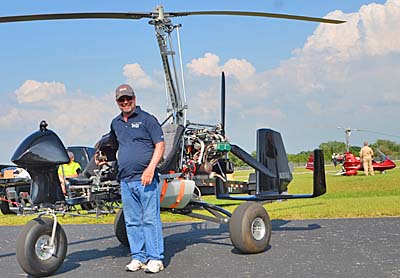 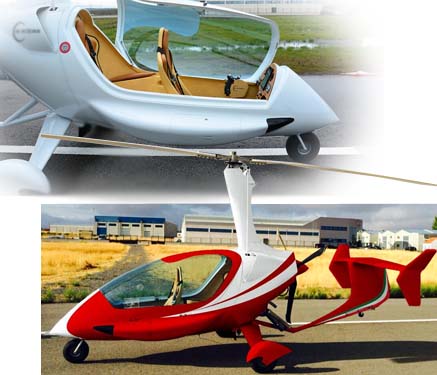 Sun ‘n Fun will feature a good selection of gyroplanes including this new-to-Americans Eclipse G10 offered by Aerotrek.

Welcome to a guest editorial by Roy Beisswenger, publisher of Powered Sport Flying magazine and a close follower of the gyroplane scene. —DJ

Bensen Days in Wauchula, Florida is our annual pre-game party leading up to Sun ‘n Fun. The Sunstate Wing & Rotorcraft Club schedules this annual soiree to coincide with Sun ‘n Fun. By holding their fly-in one week before SnF, they make it possible for vendors and participants to get a two-for-one deal. One trip south gets them two great sport aviation events. The scheduling certainly makes it possible for Vickie and me to participate.

Gyroplane organizations are not the huge organizations that we see sponsoring major events like Sun ‘n Fun and AirVenture. There is no paid staff and no big budget. The volunteers that put it together collect fees and donations to cover their expenses and build up the kitty for the next event. That is why it is such a pleasure to see an event like Bensen Days continue on year after year. It says a lot about the gyronauts in Florida!

Anyone who shows up gets a lot of bang for the small number of bucks it takes to participate. Want to go for a flight in a gyroplane? This event gives you several choices and little to no waiting. Want to talk about gyroplanes? Try talking about anything but gyroplanes! Want to see what is new? Because this is the first major gyro event of the year and the scheduling proximity to Sun ‘n Fun, you will often see things here first.

Named after famed gyro pioneer Igor Benson, Bensen Days gives people a chance to visit with vendors and pilots in the home-built market who don’t make it to the larger fly-ins. These participants are just as enthusiastic as the newer, Euro-gyro owners, but they don’t have the budgets to attend the larger events.

Some of the vendors I saw there included importers or manufacturers for Titanium Explorer, Dominator, Ela, Autogyro, Xenon and SliverLight Aviation. In fact Abid Farooqui officially introduced his American Ranger 1 gyroplane at the event. The gyroplane is going to be one of the first European-style gyroplanes designed and manufactured in the United States.

The breezy day didn’t stop the flying. Light airplanes could handle the winds, but they were quite a handful for the plane I saw take to the sky. The gyroplane pilots were aware of the wind, but had no problem with it.

One of the interesting designs I saw at the event was a ‘naked’ MTO Sport. It is ‘naked’ because it has none of the normal fuselage panels — nose cone, the floor, and integrated composite shell. Instrumentation for the aircraft is contained in small nose pod.

Autogyro representative Bob Snyder offered a flight in this unique version of their MTO. On a nice, warm Florida day, my short-sleeved shirt was just fine for the open-cockpit flight. I emptied my pockets of droppable stuff and stripped my camera down to the basic frame and lens for the flight.

After a quick introduction to the aircraft, I had to ask a somewhat embarrassing question, “How do you get in?” Most gyroplanes have some structure to use when entering, but this MTO had no floor. It stands up high on some tundra tires. Answer: Just throw your leg over the seat and slide on up. I’m glad I’m taller than average. It’s like mounting a short horse without the benefit of a saddle horn!

Once aboard, the taxi to the end of the runway took very little time and Bob got us quickly into the sky. What a blast! All open cockpit aircraft remind me a little of a flying motorcycle, but this one really fit the definition. I was seated in a more comfortable seat than on a bike and had on a seat belt and shoulder harness, but everything else was incredibly open.

Bob gave me the full familiarization flight. He showed me the capabilities of the gyro in the practice area next to the airport and over the cattle. Then he asked me if I wanted to see some alligators. Being from the Midwest, those animals always fascinate me. We went off to the phosphate mine ponds and saw some monsters, along with other wildlife.