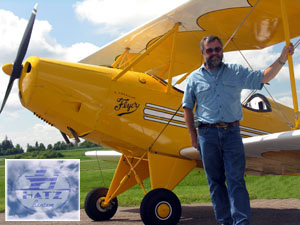 For those seeking a different kind of LSA with a vintage quality, Mark Marino’s Hatz Bantam could make an attractive choice. You’ll have to build it but if it looks this good (photo), it will surely turn heads. Email Mark.

EAA’s Minneapolis Sport Pilot Tour, plagued at first with some logistical challenges, came off very well. More than 500 LSA-interested attendees showed up at Airlake airport south of the Twin Cities metro. The local Sport Pilot school, LSA North at the Aircraft Resource Center, exhibited their CTs along with the Sportstar, KP-5, RANS S-6 and S-7 and others. One of the charmers was the award-winnng Hatz Bantam from builder Mark Marino. The Bantam is an evolution of the original John Hatz biplane designed in the 1960s. Leap forward in time and the lighter Hatz can be flown by a Sport Pilot. Previously only plans were available but Marino is now working on Hatz Partz, components that represents elements of a full kit. The 1,320 pound Bantam is powered by a 120-hp Jabiru 3300 six cylinder four stroke. It can carry a couple two hundred pounders and fly 110 mph. Check all Hatz Bantam specs.