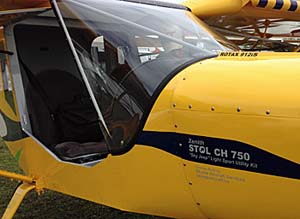 Zenith Aircraft will power its EAA One Week Wonder project with a 912 iS supplied by Rotax; several other other companies also donated products. 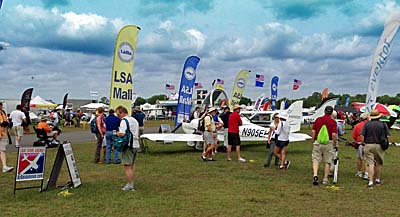 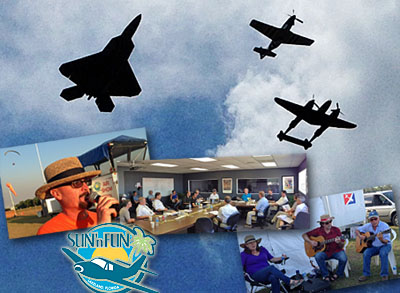 Excitement in the skies and a familiar, friendly feel made Paradise City a popular place. Pictured is Paradise City announcer Mike McClellan; a FAA and industry organization safety conference, and social gatherings that occurred spontaneously. photos by Gregg Ellsworth and Randee Laskewitz

The weather, big crowds, safe flying and airshow speed, action, and thunder combined to make Sun ‘n Fun 2014 one to remember. As reported in AVweb, top man John “Lites” Leenhouts was quoted, “We’re up 20 percent overall, as of Saturday night, over our average for the last 12 years.” As proof of crowds that seemed to grow to a crescendo, multiple long lines of people buying entry passes on Saturday caused ticket sellers to run completely out of Saturday one-day arm bands. They had to start using Friday arm bands to get everyone in who wanted to enter. Acts like the Blue Angels, “Fat Albert” — the Blue Angels C-130 Hercules support aircraft that did its own high-banking act — and a F-22 Raptor captured attention. When we drove off the grounds Sunday evening as airshows are normally winding down, we witnessed literally hundreds of people clustered outside the gates to watch the airshow. Crowds inside were dense but even the gatekeepers can’t account for total interest. The outside group were not simply drawn to the roar of jets; these folks planned their outing and came with chairs, coolers, and even tents. Honestly, I can’t recall seeing so much interest at any airshow especially on the last day.

The best news for those of us who follow the Light-Sport and light kit aircraft market was a substantial amount of sales activity. While vendors can be expected to be happy making sales, the good news for customers is that choices are plentiful and stronger businesses can provide better service and can develop more features and products.* Volunteering to work for LAMA, which operates the LSA Mall and serves the industry, BRS parachute expert Gregg Ellsworth conducted a survey of vendors at the close of Sun ‘n Fun 2014. He spoke to 19 manufacturers or importers** who reported solid sales — cash changing hands — with a tally beyond 30 aircraft. An old and fairly conservative rule of thumb has been that for every cash order logged at the show, another one will result in a couple months following. If so, Sun ‘n Fun activity may generate 70 sales of LSA or light kits. By any recent measure, that’s a great show resulting in many smiling customers. Disclaimer: Estimates are not inclusive of all sellers at the event and while we believe it is a reasonable count, sales don’t always materialize and some orders are not fulfilled.

Paradise City was again a major attraction … a show-within-a-show that increased in area activities along with an increase in exhibiting vendors. LAMA’s LSA Mall got off to a slow start in the middle of a tough winter but rallied an impressive line of 13 LSA representing many of the top-selling brands. Companies that lacked enough aircraft to participate this year expressed interest in joining the LSA Mall next year. Demo flying, though interrupted at times by military demonstrations and practice flying, was significant during the event, stimulating more than 500 movements a day. Plenty of pilots got a chance to try aircraft that interested them. More evening social events occurred in Paradise City than in previous years and the mood was upbeat among customers and aircraft and service providers. A Safety Conference co-hosted by the U.S. Ultralight Association (representing pilots) and LAMA (representing aircraft producers) drew a full room to discuss solutions as the sector reaches its tenth anniversary this summer. Having fun with airplanes in sunshine and comfortable temperatures is always good time and Sun ‘n Fun 2014 provided plenty of it.

I leave tomorrow morning for Aero Friedrichshafen in the very south of Germany. Watch for more reporting from this always-interesting event.

* As an example, Rotax upped their game with the more powerful 912 iS Sport engine and the company is able to upgrade parts to previous 912 iS customers free of charge. Customers pay for labor but several hundred dollars worth of parts are provided for free thanks to profits that allow absorbing such an expense. Rotax BRP reported a good year and customers benefitted. The company completed its first year as a public firm; it is listed on the Toronto stock exchange (Symbol: DOO.TO — the “DOO” derives from popular products, Ski-Doo or Sea-Doo).
** Vendors surveyed by Gregg Ellsworth included BushCat, Just Aircraft, Quicksilver, Evektor, Flight Design, Tecnam, Revo, AirCam, Rans, Hansen Air, Kolb, Aerotrek, Sport Cruiser, Zenith, CubCrafters, Legend, Searey, Jabiru, and others.