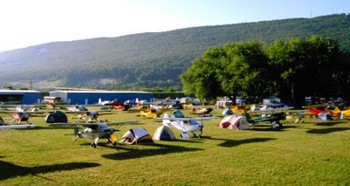 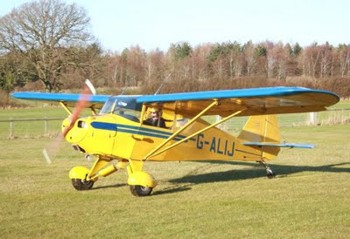 “Come one, come all!” says the invitation to the great, annual Piper Fly-In that’s coming up next week. *** Dubbed SENTIMENTAL JOURNEY 2011, it’s the 26th anniversary of this “Family-Oriented” event. ***  It’s held at – where else? – William T. Piper Airport (KLHV) in Lock Haven, PA. *** The dates for those of you who are, like myself, Cub afflicted, is June 22 — 25, 2011. You can fly in (an airspace How-To is on the organizer’s website), drive in, camp under a wing for $15/nite if you like (lots of folks do) or stay at one of several hotels, motels or B&Bs in the area. Dozens of Cubs alone, along with other models, make the trek every year. *** The Piper Museum and Memorial area also there: that’s worth a trip for cub lovers all by itself. *** There are events and contests such as seminars, flea markets, bomb drop, spot landing, corn roasts, awards, nightly bands, tours and more. *** This year’s theme: “Vagabonds Saved Piper”. *** Featured planes will be the PA-15 Vagabond and PA-17 Vagabond Trainer.Tickets are cheap enough at $8, $4 for kids 13 — 17 and under 12 youngsters are free – hard to beat that these days for a classic aircraft lovefest. *** Another note: All makes and models of aircraft are welcomed. Since most current pilots have some connection to those early Pipers anyway, no reason not to come if you’re in the neighborhood. *** I’ll be there catching some air and lots of photos for some stories. *** Also hoping for good weather for all flying in… I’m still recovering from the 6 days it took in a Cub-type to get from Iowa to Florida against bad weather for Sun ‘ Fun!