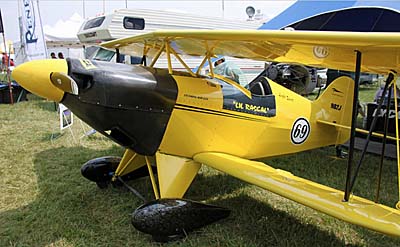 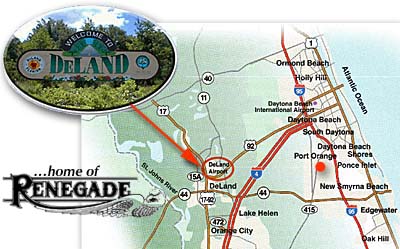 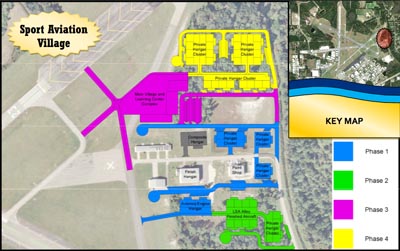 See the DeLand Airport Sport Aviation plan (note: this is a 9 MB download).

At first, it all seemed rather unlikely to me. I refer to the concept of racing LSA.

On the one hand you have a giant company with a global presence putting on the Red Bull Air Races. What a way to sell a caffeinated beverage. It works. It’s very showy. It might even induce some race watchers to take up flying. When the aircraft are not touring the race circuit, they occupy luxurious space in the fanciest hangar on the planet, Red Bull’s Hangar 7 at the Salzburg Airport in Mozart’s former home town in Austria (photo).

On the other hand we have Light-Sport Aircraft, a fairly new sector in aviation, now with one decade of history. Being in the distinctly affordable end of aviation, money does not flow as it does from Red Bull. Yet that does not mean LSA will fail to join in the air race fun. Put a man like Doc’ Bailey in charge and things happen despite the odds. Doc’, a 15,000-hour military chopper pilot, runs Renegade Light Sport Aircraft. Relocating from Missouri, he went to Fort Pierce, Florida’s municipal airport. That didn’t turn out to be the right answer and he instead found a home — and a seat on the advisory board — at DeLand, Florida’s airport, a place I recently visited.

Indeed, Doc’ is a man who, some say, casts a big shadow in Light-Sport aviation. Bailey became known for working to install Lycoming engines on LSA like his Falcon. He’s swimming upstream — but making progress — toward what he calls “SPAR,” for the Sport Pylon Air Races. I admit when I first heard Doc’ talk about this I thought he was spitting into to a light-aircraft-upsetting wind. However, he continues to take steps and now may have the right venue for such an event.

The DeLand Airport has welcomed Doc’ and his airplane building operation. That’s hardly a surprise as this is the home of a 35-year-old sky diving operation with dozens of businesses supporting or feeding off that activity plus numerous aircraft companies including U-Fly-It, Aero Adventures, and Aeroprakt America.

Recently I visited the Deland airport, to get a full tour by new airport manager (though longtime airport board member), John Eiff. More on Deland’s ambitious plans in a minute. After hearing John’s enthusiasm for Light-Sport Aircraft — which he sees as the growth area of aviation, an impression many others share — I can imagine the SPAR course being erected at Deland.

Deland’s airport is a very short hop by plane from my home airport of Spruce Creek Fly-in, the world’s large private airport and sprawling aviation community (see red dot on the nearby map image). By car, historic Deland is less than 25 minutes away. That’s convenient for me but also puts the air race concept only a short drive from the world famous Daytona Raceway, an auto race enterprise that draws crowds enormous enough to dwarf even professional football (a reported 400,000 racing fans attend the Daytona 500 and the ever-expanding business hosts evens year ’round).

More than welcoming many sport aviation businesses, Deland has some grand plans for something called the Light-Sport Village — although they’ve since rebadged it as the Sport Aviation Village to make it better understood by the non-flying city officials who are not as well versed in aviation terms.

This might be viewed as a business incubator and light aviation companies contemplating a move may want to consider what they offer here in the Sunshine State. Those business owners can speak to John Eiff at the Renegade tent at Sebring next week (January 14-17th). I know I will be following this development and Doc’s Sport Pilot Air Races. …Gentlemen, start your engines.