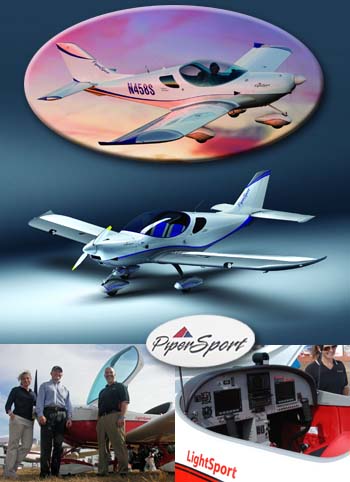 Legacy Brands — Piper took a different approach from Cessna — choosing to distribute an established LSA — and didn’t make the errors of Cirrus (who took so long to “Cirrus-ize” the SRS that the economy put the project on hold). The lower left photo shows the PiperSport “Go Team” of marketer Jackie Carlon (L), CEO Kevin Gould (C), with VP and PiperSport Project Manager Derek Zimmerman (R).

What a way to start the year. Piper called a press conference at Sebring and like no other I’ve seen after attending all six Expo events, the media turned out in droves. On opening day the legacy brand unveiled their LSA entry at Sebring 2010 (it was also their first exhibitor appearance). Camera clicked constantly, videos whirred, and recording devices captured every uttered word. It may not have been as spectacular as Apple’s iPad media event, but it generated the same kind of intense buzz. Here’s a few facts I haven’t seen in the other generous media coverage. *** Piper is a 72-year-old much-storied producer of 140,000 airplanes. They have certified 160 models (50% more than the incredible output of all LSA producers combined). They span the general aviation spectrum from the $120,000 PiperSport to the $2.2 million PiperJet. The company’s iconic Piper Cub inspired two replica LSA producers (American Legend and CubCrafters), whose aircraft comprise two of the top five among all LSA manufacturers… and the only two of the top eight SLSA that are built in the USA. *** As recently as last summer no one forecast Piper’s entry, again illustrating the dynamic and fast-developing nature of Light-Sport Aircraft. But the company is gung-ho on the sector. CEO Kevin Gould said, “Piper is entering what is undeniably one of the most exciting market segments in general aviation.” *** In a move I consider savvy, Piper will keep all existing SportCruiser dealers adding them to 27 Piper Aircraft dealers, 65 service centers, and 2,500 field personnel. Watch for my full-length pilot report coming in the March 2010 issue of Light Sport & Ultralight Flying, which will be posted here by spring.