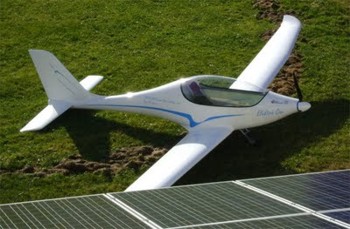 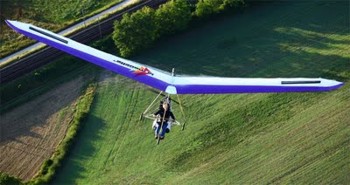 Well, Thomas, you’ve done it again: gotten me to blather on so long with your as-always thoughtful and knowledgeable comments that I exceeded the comment buffer so have to palaver on here in another post. *** Well, that’s why they call it a weBlog I guess: it’s a place to hang our thoughts out to dry. *** So what’s below is a response to your comment from yesterday’s post, with a couple more pix thrown in to thump the eye candy factor. *** I think we can’t overlook the market factor here. Just as car manufacturers know where the buyers are, it could be what we’re seeing with these projects aiming toward higher/faster/more payload electric are manufacturers figuring that they’re since they’re going to sell more of the expensive, travel-capable airplanes than sailplanes and motorgliders anyway, why concentrate time and resources on a transient, historically tiny share of the market? Leapfrog to the future, expect the tech to come along as needed. *** If I’m right, it’s a visionary way to jumpstart an entire new genre, a new epic in fact, of flight. *** And since I don’t profess to be an expert, I’m just observing it like you are and wondering myself exactly which way and ways it will go. *** Your NASA reference is intriguing. I’d like to talk with some electrical bigbrains for enlightenment on the concept as I hadn’t heard that. *** It could very well be that there’s an “economy of weight”, like economies of scale in manufacturing, that comes into play beyond a gross weight threshold, given the current technology. Still, Randall Fishman is quite unequivocal about it: he says he’s crunched the numbers and has no doubt that the heavier the airplane and the poorer the pure aerodynamic efficiency, the less electric power makes sense, given the capacities we have today. *** I’ll save myself from being thought a fool by opening my mouth and removing all doubt, by continuing to watch for what actually comes to market and extrapolating possible futures from that, as we’ve all begun doing to date. *** I do believe we will see 4-seaters like Yuneec is currently promising. *** When? *** Battery advances will surely determine, barring some other superspiffy technology coming in that nobody expects, such as some super solar cell. *** Energy storage remains the holy grail from what I hear and read everywhere. *** I also believe Yuneec has learned very well how to gin up enthusiasm, but it may well be true, like the flying car people, that they’re simply making sure their name stays out there in public view, knowing full well they’d be making an epic mistake by pushing out “vapor wings”, i.e. aircraft that aren’t really refined and truly ready for the market.They can’t fail to have noticed the Billion Dollar Debacle of VLJ, the Very Light Jet, as envisioned by Eclipse, which went down the drain and took most of the other swimmers with it. *** VLJ was trumpeted as the next great thing, the savior of smaller airports, the harbinger of a vast new regional “air taxi” network that would make short- and medium-distance travel more practical by helping many of us, especially businessfolk, avoid the hassles of big airline terminal travel. *** Problem was, the idea was not economically practical as conceived, and few VLJ will ever make it to market. *** Yuneec has plenty of money and is at the vanguard of an entire new industry that they’re helping to create, and surely hopes to cash in on with lots of sales. *** And clearly they’re not rushing anything to market. I wondered if they were having technical problems. But the word I get from Yuneec insiders is they are not going to risk all that potential by rushing anything to market until it is thoroughly wrung out and ready for John Q. (Litigation-Capable) Public to fly safely and enthusiastically.Remember when the iPhone came out? That was a well-refined product. I remember seeing the first commercials with the finger flick-scrolling from page to program, and thinking, “Yeah, right, just another bogus advertising hype.” *** Then I saw one some eager owner couldn’t wait to share with me and anyone else within earshot. *** I bought one as soon as I could and have never regretted it. History changed with that product, just as it will with well-produced electric aircraft. *** Two- and four-seat electrics are in our near future, we can hope, along with practical, affordable electric cars. *** In the meantime, there’s a much broader technology to grow, and we’re so clearly very much in the early Wright Years, so my guess is Moore’s Law of computer tech proliferation (doubling every 18 months I think it is) will not likely happen just yet. *** There’s still an entire, and basic, infrastructure to create and develop. There are economies of scale to create first to make them affordable. *** So that leads me back to concluding that for those of us who really want to fly behind (or in front of) an electric propulsion unit, we’re better off for the next five years flying what I espoused above: light, efficient glider-style aircraft. *** We shouldn’t expect the moon just yet…but we can sure jump in and join the party, rather than gripe that we’re not really saving money or going as far as we can with gas airplanes. *** That’s not the point in this stage of history, not the point at all. *** Would I love to be dead wrong? Would I welcome a two-seat, 2-3 hour electric 100 knot cruiser next month? That didn’t cost $150,000, but more like $40-50,000?   *** You bet I would. *** And maybe we’ll see it happen. *** That’s part of the fun: we get to watch it happen, all of us, and be a part of it as it unfolds.