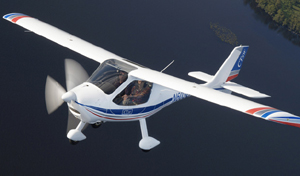 From sleek airplanes like this CT to the StingSport to Sport Rider to the lovable Legend Cub, Light-Sport Aircraft production is going through a “controlled explosion,” building airplanes to certified standards as fast as possible.

Recently at least four companies have announced their expansion plans and more have certainly been working similarly but not made their plans public. I’m only guessing here (while we wait for federal N-number registrations to catch up to reality)…but I’d say deliveries of SLSA may have numbered 500 aircraft in 2005. While that’s a healthy start, 2006 appears to be a year for LSA to fill the skies far more. Flight Design announced plans to approximately double output of their market leading CT to over 200 aircraft (half of which will come to the USA). TL Sport Aircraft is preparing to quadruple production of their StingSport. FlyItalia-AveoUSA is adding a much larger factory for 150 workers. And Texas-based Legend Aircraft is building a new plant to substantially increase deliveries. With these and others planning to build many more planes plus new providers coming online, we could see 1,000+ deliveries in 2006. If things go well, I can envision 2,000 units annually in another year or two…and I think I’m being rather conservative.