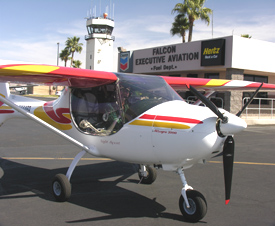 Falcon Executive uses this Allegro 2000 from Fantasy Air USA. Dan David (in pilot’s seat) loves flying it and can pursue his interest with one leg. “I just move my foot back and forth on the rudder pedals,” he reports.

In late 2005 I began visiting general aviation flight schools around the country on behalf of EAA and industry. I found a few schools already embracing FAA’s newest class of pilots and aircraft. One is Falcon Executive Aviation in Mesa, Arizona. When I visited this school at the occasion of the Phoenix Sport Pilot Tour, I asked Vic Hannig how he felt about their use of an LSA. Specifically, I wanted to know if the LSA was taking flight hours away from their fleet of GA aircraft trainers. His answer, “No. It’s new money.” His comment referred to students they would not have trained otherwise were it not for their acquisition of a LSA and their pursuit of Sport Pilot instruction. Falcon isn’t the only school to support SP/LSA. St. Charles Flying Service (St. Louis area) and Aero-Tech (2 schools in Kentucky) are also enthused about the new category, plus others I don’t have room to list here. Hopefully many more will follow their lead.