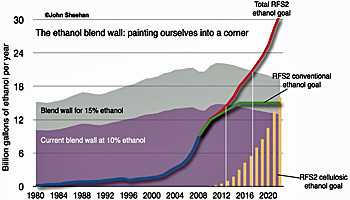 The “Blend Wall” problem is clearly shown on this chart, showing the problem arrives in 2013. Chart compliments of Dean Billing; used at an Oshkosh forum. 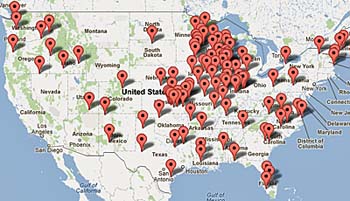 Use this often-updated map to find mogas airports.

Do you support the idea of “energy independence” by using ethanol blended into your fuel? Are you aware that politics drives the use of ethanol? Do you know that ethanol is reaching what’s called a “blend wall” — as soon as next year — and that this could have major consequences for ethanol-laced fuel? Sounds rather wonky, I know. Yet this matter affects the fuel for our aircraft engines in a very direct way. Although Rotax and Jabiru can handle 10% ethanol, the blended fuel can be very hard on engines not designed to handle the damaging aspects of water-absorbing alcohol in fuels. Pilots like their engines to last and to run consistently, so any ethanol presence in fuel can be serious.

Outspoken zero ethanol (E0) advocate Kent Misegades wrote in GA News, “Ethanol producers have found themselves under more pressure than ever in recent months, with numerous efforts afoot to grant waivers or even repeal the Renewable Fuel Standards (RFS) production mandates that have resulted in the nearly complete adulteration of our nation’s fuel supply in recent years.” He relates recent events such as a drought in corn-producing states contributing to higher gas prices and increased cost of feed for livestock plus the fact that ethanol, a highly-corrosive substance, may not be pumped through fuel pipelines so it must be trucked or shipped by rail or barge.

Fuel expert Dean Billing added to my understanding, “The federal government decided in late 2007 that the U.S. needed a huge push in bio-fuels to cut demand for fossil fuel-based energy. They thought they were putting together a program that would push demand and production of E85 (85% ethanol / 15% gasoline) and flex-fuel vehicles, which are the only cars that can burn the stuff.” The main problem, as Dean explained is that a production table was written right into the law requiring gasoline producers to blend more and more ethanol into gasoline by a rising quota each year through 2022. If they failed to meet the quota, gasoline producers faced fines.

“The gasoline producers have to blend increasing amounts of ethanol into gasoline through 2022. Since the law doesn’t tell them how to blend the ethanol, and doesn’t require them to make E85 — for which there is no market * — they make E10 … all E10, all the time. However, it is easy to mathematically determine how much ethanol is needed to turn every drop of gasoline in the U.S. into E10 and we have known that limit for years. It was obvious years ago that with gasoline demand stagnant at about 135-140 billion gallons a year, it would take less than 14 billion gallons of ethanol to turn it all into E10 and we would reach a ‘blending wall’ when the table in the law reached that amount. Well, guess what? Next year, 2013, we hit the wall. With gasoline demand declining it will be easy for the 14 or so billion gallons of ethanol required by the quota table to turn all of our gasoline into E10. And every year after that through 2022, the ethanol quota rises. It should be obvious, even to a politician, that there is nowhere for this ethanol to go.” * only about 2 percent of gas stations sell E85

What does this mean? Producers may get fined and they’ll have to pass that cost along in higher fuel prices. Or, the law pragmatically fails and goodness knows what ethanol politicians might do. Combine this with the so-called “fiscal cliff,” and flying costs could be significantly affected. Yes, our Rotaxes and Jabirus will run on ethanol but they prefer E0 where available just like they prefer mogas to 100LL avgas. Ethanol also lowers fuel economy and aviation doesn’t need higher costs. Fortunately, some good news exists.

Kent wrote, “Some states are working to increase the availability of ethanol-free fuel, which is good news for pilots. In Florida, where a mandatory E10 ruling for highway vehicles that took effect in early 2011 has had a disastrous impact on recreational boating, leading members of the state’s legislature are working to repeal this onerous law.” Stores like QwikTrip in the midwest are widely offering E0. Dean warns, “the federal RFS mandate is so overwhelming” that state actions may not help. However, he says states could “pass a law to prohibit the blending of ethanol in premium unleaded gasoline in order to protect their marine [and] aviation industries.” I’ll keep an eye on this problem and will report more in the future.