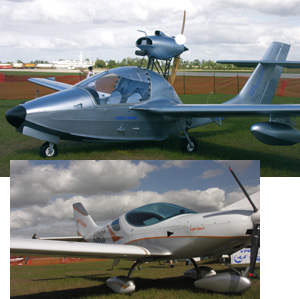 This pair of all-metal Light-Sport Aircraft from Czech Aircraft Works represent two of three models the American-owned company has certified to SLSA standards (the other is the Parrot). In particular note the Mermaid engine sitting up on struts. And watch for my SportCruiser report to post here soon.

At the Sebring LSA Expo, visitors saw two airplanes they’d seen before, but these were actually revised models that are now ready for waiting pilots. The Mermaid charmed the LSA world when it was first introduced, since collecting more than 200 order deposits. The boat hull LSA also earned the first of two exemptions regarding the “repositionable” gear detail that has so befuddled FAA lawyers. The agency says it will fix this part of the SP/LSA rule by May 2007 but Mermaid is one of only two amphibs that allow Sport Pilots to reposition the gear. [UPDATE: LSA Aero’s Freedom S100 also recently won an exemption.] Mermaid’s engine now sits up on struts. Not only does this look great, the change has solved prior challenges of the Jabiru 3300 engine installation. It is also said to decrease noise. *** SportCruiser may look the same to you but the “third generation” model is said to fly better and it certainly looks sleeker with its beautifully shaped canopy. The 3G SportCruiser generated several sales at Sebring.