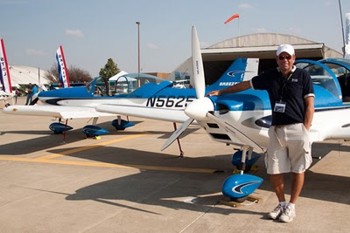 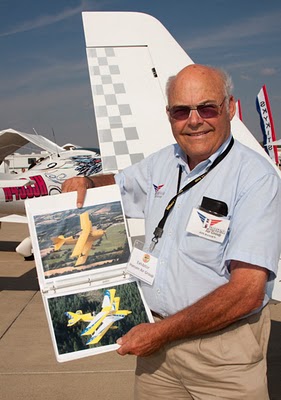 That title is a bit tongue-in-cheek, since the first day of the Midwest LSA Expo here in Mount Vernon, IL was what you’d call winnnnnndy! *** The big storm front grounded our flight of two Evektor SportStar MAXs two hours east of here Wednesday. That was after our long, headwind-bashing flight from Art Tarola’s Allentown, PA AB Flight center that added two extra hours to the journey (glad it was a MAX — super comfortable airplane to fly and spend time in). *** The heat and humidity (95 degrees) at least had 25 knot winds to help keep it bearable all day, but there was no flying to speak of until the last hour of the day when the wind died down. *** I took the opportunity to jump up and shoot a few landings with Bill Canino in his iCub, which was a hoot. Super tight, fun ship which I’ll be writing up for an issue of Plane & Pilot soon. *** Here’s some cogent highlights from the day’s events: • David Kruger reprised his worthy Aircraft Partnership Association crusade with a thorough overview of all the ins and outs of buying an aircraft with other people. I did a column on his exhaustive work last year, and his website, which includes free membership, deserves a look if you’re thinking of buying an LSA but can’t pony up the full cash Monty on your own. • Several other seminars going on too, including edifying talks by industry gurus like Roy Beisswenger, Jim Sweeney and Dan Johnson. • On the flight line, dozens of top notch LSA are here, including the Falcon LS, two Evektors (full IFR package on the one I flew out in), Darin Hart and his Legend Cub, Rob Rollison’s Aerotrek A220 and A240, at least two beautiful Rans S-19 Venterras, Jon Hansen’s stable of lovely airplanes including an FK9 Mk IV and Mike Zidziunias with two Breezers flown up from Plant City, FL. • The photos show Mike with his two pretty blue and white Breezers and Jon with his FK models. Jon also brought an Italian Sky Arrow (more news coming on Sky Arrow… stay tuned), and he’s also talking about the FK-12 Comet aerobatic biplane LSA which he’ll import from Europe to join his Hansen Air Group operation by mid-next year. Jon filled me in on some tantalizing details: • “The Comet will be a ‘Limited Edition’, with larger tailfeathers than the Euro version, a longer nose, and it will handle more like a Decathlon or J3 Cub… yet it’s a fully acrobatic airplane.” • Powerplant will be a new fuel injected Lycoming 233 with electronic ignition or a non-acrobatic-rated Rotax powered version. Jon thinks it’ll price out between $110,000 and $120,000 depending on which engine. *** Both Jon and Mike Z talked about their current LSA training and rental operations. “Rentals are helping us get through the economic crunch big time,” says Mike. “We’re renting the Breezers out for about five hours per week. Jon Hansen cites similar numbers. Whatever it takes, right? *** While storm to the north soak the northern midwest, Saturday’s forecast at Mt. Vernon looks excellent.